Cannabis in Ukraine is illegal, but the country is in process to a legalization of cannabis for medical purposes.

In April 2021, some THC- and CBD-containing drugs were approved for medical use (namely Dronabinol and Nabiximols).[1]

Soviet Ukraine was one of the biggest producers of hemp, and before the 1950s, it had over 150.000 hectares dedicated to hemp cultivation.[citation needed] Cannabis wasn't widely used as a recreational drug in Soviet Ukraine, most of the grown hemp would be used for its other natural resources such as oil and fiber.[2]

According to Article 106-2 Code of Administrative Offences Ukraine, cultivation (without intent to sell) up to 10 cannabis plants qualifies as an administrative violation, with a fine of from 18 to 100 non-taxable income units (300-1700 hryvnia in 2011) and the seizure of plants.[3]

The limit for possession without intent to sell, for which no criminal liability is given, is up to 5 grams of cannabis.[citation needed] However, there are plans to raise this limit to 10 grams.[4] 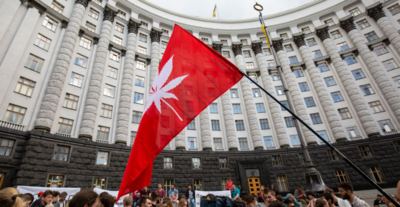 The 2019 March for legalization taking place in front of the Ukrainian government building.

On January 30, Ukrainian Association of Medical Cannabis created the petition with the backing of 16 public organizations on the Verkhovna Rada website. The petition said that medical cannabis could greatly help over two million Ukrainians suffering from a wide range of ailments, including epilepsy, cancer and post-traumatic stress disorder. Acting Health Minister Ulana Suprun supported petition and called for the promotion of legalization medical cannabis.

The legalization of medical cannabis - was supported by the President of Ukraine Volodymyr Zelensky in an interview to RBC-Ukraine on April 18.

October 25 President Zelenskyy announces nationwide poll. The fourth question is: “Do you support the legalization of cannabis for medical purposes – to reduce pain in critically ill patients?” Former Minister of Health Ulana Suprun wrote on her official Facebook page that “Cannabis should be available to all patients who need it. There are about 2 million such patients in Ukraine.” 64.88% of the participants answered “yes”, 29.53% - “no”.