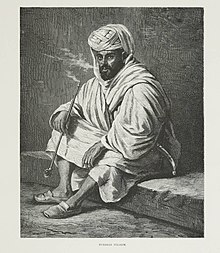 Cannabis in Tunisia is illegal.[1] Cannabis is also known as Zatla nationally or Takrouri regionally.[2]

Cannabis is believed to have been introduced to Tunisia during the Arab invasions of the 9th through 12th centuries.[3] In 1550 Leo Africanus' Description of Africa described hashish consumption in Tunis:

They have here a compound called Lhasis [ihasis in the original Italian], whereof whosoever eateth but one ounce falleth a laughing, disporting, and dallying, as if he were half drunken; and is by the said confection marvellously provoked unto lust.[4]

Cannabis prohibition was introduced in Tunisia under French rule[5] and outlawed by decree on 23 April 1953.[2]

Tunisia still uses urinalysis to prove cases of use without possession. If the urinalysis result is below 20 nanogram/liter, the defendant will be accused by inhalation which is 6 months of imprisonment.[6][7][8]