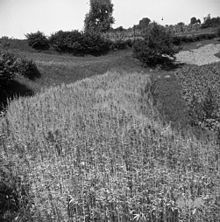 Cannabis in Slovenia is illegal but decriminalized. While medical marijuana is not allowed, the use of certain cannabinoid drugs is permitted.

In 2012, a proposal was drafted to decriminalize medical cannabis,[1] but it failed to obtain the necessary support. A new proposal was drafted in 2013,[2] which succeeded in gaining enough public support. As a result, the Slovenian government re-classified cannabinoids as Class II illegal drugs (from the original Class I), thus allowing for the medical use of cannabinoid drugs but not medical marijuana.[3][4]

The possession of any drug for personal use in small quantities is not registered as a criminal act in Slovenia, but it is instead a misdemeanor punishable by a fine of 36-179€. It is in this sense that it is considered "decriminalized". This can be reduced further if the offender agrees to undergo treatment. This policy is similar to the one in force in Portugal.[5]