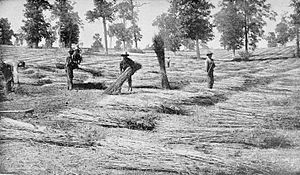 Cannabis in Kentucky is illegal for recreational use, though non-psychoactive CBD oil is legal in the state, and Kentucky has a lengthy history of cultivating industrial hemp for fiber since 1775.

Hemp was first cultivated for fiber in Kentucky near Danville in 1775, and cultivation there continued into the 20th century even though cultivation had diminished in other states.[1]: 292

Practically all of the hemp grown in the United States is from seed produced in Kentucky. The first hemp grown in Kentucky was of European origin, the seed having been brought to the colonies, especially Virginia, and taken from there to Kentucky. In recent years there has been practically no importation of seed from Europe. Remnants of the European types are occasionally found in the shorter, more densely branching stalks terminating in thick clusters of small leaves. These plants yield more seed and mature earlier than the more desirable fiber types introduced from China[.] Nearly all of the hemp now grown in Kentucky is of Chinese origin. Small packets of seed are received from American missionaries in China. These seeds are carefully cultivated for two or three generations in order to secure a sufficient quantity for field cultivation, and also to acclimate the plants to Kentucky conditions. Attempts to produce fiber plants by sowing imported seed broadcast have not given satisfactory results. Seed of the second or third generation from China is generally regarded as most desirable. This Kentucky hemp of Chinese origin has long internodes, long, slender branches, opposite and nearly horizontal except the upper ones, large leaves usually drooping and not crowded, with the seeds in small clusters near the ends of the branches. Small, dark-colored seeds distinctly mottled are preferred by the Kentucky hemp growers. Under favorable conditions Kentucky hemp attains a height of 7 to 10 feet when grown broadcast for fiber and 9 to 14 feet when cultivated for seed.[1]: 302–303

On February 20, 2020, House Bill 136 passed 65 to 30. It was the first time a medical marijuana bill has been taken up by the full House. The bill proposes restrictions on who can have medical marijuana and where it can be used, and prohibits smoking medical marijuana. It stalled in the Senate due to the COVID-19 pandemic. The sponsor, Representative Jason Nemes of Louisville, stated that he would be re-submitting the Bill for the 2021 General Assembly.[5]

Kentucky House Bill 136 was introduced on January 4, 2022.[6] Passed House Judiciary Committee 15-1 on March 10,[7] and was passed by House 59-34 on March 17.[8] The governor of Kentucky, Andy Beshear, said on April 7 that he was considering executive action to permit medical cannabis in his state if the bill was not approved in the state senate.[9] HB 136 did not receive a hearing in the Kentucky Senate by the end of the session on April 15,[10][11] and days later, Beshear confirmed that executive actions would be forthcoming.[12]

On June 14, Governor Beshear appointed a 17-member "Team Kentucky Medical Cannabis Committee" through executive order 2022-338 – noting "allowing Kentuckians diagnosed with certain medical conditions and receiving palliative care to cultivate, purchase, and/or use medical cannabis would improve the quality of their lives" and attendant economic benefits – with the purpose of holding public hearings. The committee had its first meeting on June 20.[13][14] A public feedback website, medicalcannabis.ky.gov, was also created under the order.