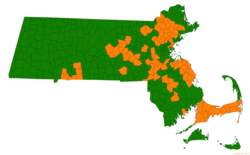 The Massachusetts Legalization, Regulation and Taxation of Marijuana Initiative also known as Question 4, was an indirect initiated state statute question to legalize, regulate and tax recreational marijuana that appeared on the November 8, 2018 Massachusetts general election ballot.[1]

In December 2016, the state legislature voted to delay the opening date for recreational marijuana stores in Massachusetts by six months. The opening was delayed from January 2017 to summer and eventually to November 20, 2018, the first day of state-licensed cannabis sales in Massachusetts.[4]