William H. Cabell (December 16, 1772 – January 12, 1853) was a Virginia lawyer, politician and judge aligned with the Democratic-Republican party. He served as Member of the Assembly, as Governor of Virginia, and as judge on what later became the Virginia Supreme Court. Cabell adopted his middle initial, which did not stand for anything, in 1795, to distinguish himself from other William Cabells, including his uncle William Cabell Sr. and first cousin William Cabell Jr. (1759-1822)[1][2]

Young William Cabell studied with private tutors and, later, attended and graduated from Hampden–Sydney College in 1789.[4] He then moved to Williamsburg and attended the College of William and Mary, where he took legal courses from Judge St. George Tucker before graduating in July 1793. Young Cabell then moved to Richmond to read law.

Cabell began his legal career soon after his admission to the Virginia bar on June 13, 1794, and also followed his father's footsteps in entering politics. Amherst County voters elected him to the Virginia House of Delegates to succeed his cousin (after adopting his distinguishing initial). Although Amherst County voters failed to re-elect him after that term, this Cabell would serve multiple terms as one of Amherst County's two (part-time) delegates before being elected the 14th Governor of Virginia and serving from 1805 to 1808.[5]

In one of his early legislative terms, Cabell voted for the Virginia resolutions against the alien and sedition laws, which were designed to impede his political party. Cabell also served as Republican Presidential elector in 1800 and 1804. While he was Virginia's governor, the British sloop of war Leopard attacked the frigate Chesapeake off Norfolk (the Chesapeake–Leopard affair later known as a forerunner of the War of 1812) and former Virginia governor Thomas Jefferson ordered the arrest of Vice President Aaron Burr for the Burr conspiracy. Burr went on trial for treason in Richmond, because much the planning took place in lands Virginia once claimed in the Ohio Valley, but was acquitted as U.S. Supreme Court Chief Justice John Marshall (a fellow Richmond resident) found insufficient evidence of treason, although much conspiracy.

As his gubernatorial term ended, in December 1808, the General Assembly elected Cabell a judge of the general court. Two years later, legislators selected him for a vacant seat on the Supreme Court of Appeals. He began serving on that court on March 21, 1811, and served continuously for more than four decades. During the court's reorganization in 1831, Cabell was again selected to the new court, where he became president on January 18, 1842. He remained in this position until 1850, but during the last year before his resignation had several absences due to ill health. 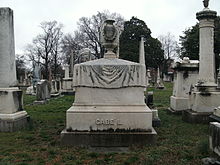 Cabell built the Midway Mill in 1787, which later was listed on the National Register of Historic Places, but demolished in 1998.[6][7] In 1795, back in Amherst County, William Cabell married Elizabeth Cabell (1774-1801), but they had no children who survived. After her death, on March 11, 1805, he married Agnes Sarah Bell Gamble, eldest daughter of Colonel Robert Gamble, of Richmond.[8] Their children included:

Cabell died on January 12, 1853 in Richmond, Virginia and was interred in Shockoe Hill Cemetery.

Cabell's executive papers are held at the Library of Virginia.[12]

Cabell County, West Virginia was named in his honor, as is a residence hall at William & Mary.[13]