Rogers County is a county located in the northeastern part of the U.S. state of Oklahoma. As of the 2010 census, the population was 86,905,[1] making it the sixth-largest county in Oklahoma based on population. Its county seat is Claremore.[2] Rogers County is included in the Tulsa, OK Metropolitan Statistical Area.

Originally created in 1907 from the western Saline District of the Cherokee Nation, this area was named the Cooweescoowee District, and Cooweescoowee County at the time of statehood. But the residents protested and the name was changed to Rogers County, after Clem Vann Rogers, a prominent Cherokee rancher and father of Will Rogers.[3][4] 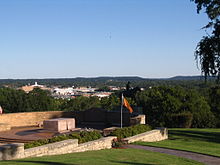 According to the Encyclopedia of Oklahoma History and Culture, the Arkansas Band of the Osage Nation settled in the Three Forks area (the junction of the Arkansas River, Grand River and Verdigris River during the 1760s and established two villages called Pasuga and Pasona in what is now Rogers County. Pasona was near an ancient earthwork platform mound near the Verdigris River. It was later called Claremore Mound, to honor Osage chief Claremore (aka Gra-mon in Osage, meaning Arrow Going Home; his name was first recorded by French colonists as Clermont.)[3]

In 1828, Cherokee bands who had left the Southeast early exchanged their Arkansas land for an area that included present-day Rogers County. This had been ceded by the Osage in 1825 under a treaty to the United States.[3] The area became organized by the Cherokee Nation as the Saline District of their portion of Indian Territory. In 1907 the western portion of that district was organized as the Cooweescoowee District.[3]

Upon statehood in 1908, the district was designated as a county named Cooweescoowee. Residents supported renaming the county in honor of Clement Vann Rogers, an early Cherokee settler and prominent rancher here.[3]

Shortly after statehood, Eastern University Preparatory School was established on College Hill, just west of Claremore, Oklahoma.[5] The Oklahoma Military Academy, established in 1919, took over the facility.[5] In 1971 the academy was closed and the facility was converted for use by Claremore Junior College.[5] As a four-year curriculum and graduate departments were added, the state legislature renamed the institution as Rogers State College and Rogers University, before settling in 1998 on the current Rogers State University.[5]

The following sites in Rogers County are listed on the National Register of Historic Places: