The Laguna Pueblo (Western Keres: Kawaika [kʰɑwɑjkʰɑ]) is a federally recognized tribe of Native American Pueblo people in west-central New Mexico, near the city of Albuquerque, in the United States. Part of the Laguna territory is included in the Albuquerque metropolitan area, chiefly around Laguna's Route 66 Resort and Casino. The name, Laguna, is Spanish (meaning "small lake") and derives from the lake located on their reservation. This body of water was formed by an ancient dam that was constructed by the Laguna people. After the Pueblo Revolt of 1680–1696, the Mission San José de la Laguna was erected by the Spanish at the old pueblo (now Old Laguna), and finished around July 4, 1699.

Their reservation lies in parts of four counties: In descending order of included land area they are Cibola, Sandoval, Valencia and Bernalillo Counties. It includes the six villages of Encinal, Laguna, Mesita, Paguate, Paraje, and Seama. The reservation is 45 miles (72 km) west of the city of Albuquerque. The reservation consists of approximately 500,000 acres (2,000 km2).[3]

The Laguna Pueblo (and the Acoma Pueblo) lie in the river basin of the Rio San Jose.[4] The laguna or lake was historically much larger than the present time and hosted waterfowl of many kinds, including ducks, geese and swans.[5] The Rio San Jose flows into the Rio Puerco near the southeast corner of the Laguna Reservation. 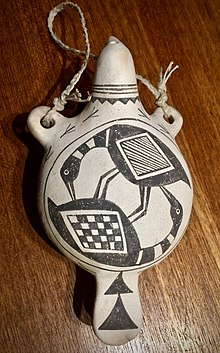 The people of Laguna have a long history of residing in and farming along the Rio San José in west-central New Mexico. Laguna history begins long before the advent of written records in the Southwest.[9] It is a common misconception that the Pueblo of Laguna began in 1699, at the time of the construction of the Mission. However, research of 1,449 archaeological sites and an anthropological analysis of the Laguna oral history have firmly proven that people have inhabited the area ranging from 6500 B.C. to the present.[10]

The Acoma Pueblo and Pueblo of Laguna have many ties, including location, language and a shared high school.

The Irish surname Riley was adopted by many members of the Laguna tribe in the 1800s, for legal use in European-American culture, while they retained their Laguna names for tribal use.[citation needed]

Primary and middle school education is provided by the Laguna Department of Education,[11] which also operates Early Childhood program and adult education programs. The high school is shared with nearby Acoma Pueblo. Lagunas value intellectual activity and education, so a scholarship program has led to many well-educated Lagunas.[citation needed] Uranium mining on Pueblo of Laguna land has contributed to this scholarship program as well as to skilled labor learning among Laguna members. Lagunas and other Pueblos enjoy baseball. Like many Pueblos, the Laguna people are skilled in pottery.[citation needed] 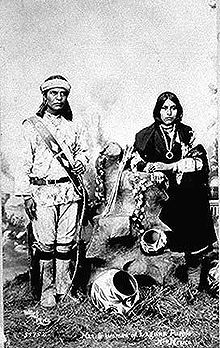 Lagunas traditionally speak the Western variety of Keresan. Most Laguna elders do not speak English.

The company develops and operates the tribe's retail-based outlets, including two travel centers, a supermarket, a convenience store, an RV park, an arcade, a Superette and three casinos on the Pueblo of Laguna reservation that spans Cibola County, Bernalillo, Valencia and Sandoval counties.

Laguna Construction Company, a construction company owned by the Pueblo of Laguna, was one of the largest U.S. contractors in Iraq, with reconstruction contracts worth more than $300 million since 2004. In addition to its headquarters at the pueblo, Laguna Industries, Inc. maintains offices in Albuquerque, New Mexico; San Antonio and Houston, Texas; Baghdad, Iraq, and Amman, Jordan. In 2007, Laguna Construction employed 75 people, most of whom belong to the pueblo.[12]

[13] former chair of the Democratic Party of New Mexico, and nominee for lieutenant governor in 2014