For other uses, see Kampong (disambiguation). 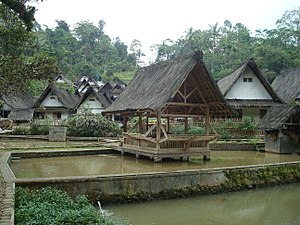 A kampong or kampung (both Malay and Indonesian spelling) is a village in Brunei, Indonesia, Malaysia and Singapore and a "port" in Cambodia. The term applies to traditional villages, especially of indigenous people, and has also been used to refer to urban slum areas and enclosed developments and neighbourhoods within towns and cities in Malaysia, Indonesia, Singapore, Cambodia, Sri Lanka and Christmas Island. The traditional kampong village designs and architecture have been targeted for reform by urbanists and modernists and have also been adapted by contemporary architects for various projects. Traditional kampongs are also a tourist attraction.

The English word "compound" referring to a development in a town is from the Malay word kampung.[1]

In Brunei, the term kampong (also kampung) primarily refers to the third- and lowest-level subdivisions after districts (Malay: daerah) and mukim (equivalent to subdistrict). Some kampong divisions are sufficiently villages by anthropological definition or in its traditional sense, while others may only serve for census and other administrative purposes. There are also some which have been incorporated as part of the capital Bandar Seri Begawan and a few towns.

A kampong is generally led by a ketua kampung or village head. Infrastructure-wise, it typically has a primary school and a balai raya or dewan kemasyarakatan, the equivalent of a community centre. Because many kampongs have predominantly Muslim residents, each may also have a mosque for the Jumu'ah or Friday prayers, as well as a school providing the Islamic religious primary education compulsory for Muslim pupils in the country.[2]

Both "kampong" and "kampung" are used with equal tendency in written media as well as in official place names. For example, Keriam, a village in Tutong District, is known as 'Kampung Keriam' by the Survey Department but 'Kampong Keriam' by the Postal Services Department — both are government departments.[3][4]

In Sumatra the indigenous peoples have distinctive architecture and building type features including longhouses and rice storage buildings in their kampongs. Malays, Karo people, Batak people, Toba people, Minangkabau people and others have communal housing and tiered structures.

Orang Kampung means "people from/of the village" in Indonesia and it sometimes becomes a degrading label such as in America the term hillbilly. Kampungan is an Indonesian term to address behavior, acts, traditions, customs, and other things associated to that which resembles villagers.

The kampong by Peter Nas, Leslie Boon, Ivana Hladka and Nova Tampubolon explores various iterations of the kampong as a rural settlement, mythical place of origin for the Minangkabau, palatial compound, and slum settlement, while looking at attempts to modernize, social changes, tourism, and urbanism.[5]

In Malaysia, a kampung is determined as a locality with 10,000 or fewer people. Since historical times, every Malay village came under the leadership of a penghulu (village chief), who has the power to hear civil matters in his village (see Courts of Malaysia for more details).

A Malay village typically contains a masjid (mosque) or surau, paddy fields or orchards and Malay houses on stilts. Malay and Indonesian villagers practice the culture of helping one another as a community, which is better known as "joint bearing of burdens" (gotong royong). They are family-oriented (especially the concept of respecting one's family, particularly the parents and elders). It is common to see a cemetery near the mosque. In Sarawak and East Kalimantan, some villages are called long, primarily inhabited by the Orang Ulu.

The native Malay kampung are found in Singapore, but there are few kampung villages remaining, mostly on islands surrounding Singapore, such as Pulau Ubin. In the past, there were many kampung villages in Singapore but development and urbanization have replaced them. Development plans for Kampong Glam have been controversial. Singapore is also home to Kampong Buangkok, featured in the film The Last Kampong.