As of January 2020, there are 355 municipalities (Dutch: gemeenten) plus 3 special municipalities (bijzondere gemeenten) in the Netherlands. The latter is the status of three of the six island territories that make up the Dutch Caribbean. Municipalities are the second-level administrative division, or public bodies (openbare lichamen), in the Netherlands and are subdivisions of their respective provinces. Their duties are delegated to them by the central government and they are ruled by a municipal council that is elected every four years. Municipal mergers have reduced the total number of municipalities by two-thirds since the first official boundaries were created in the mid 19th century. Municipalities themselves are informally subdivided into districts and neighbourhoods for administrative and statistical purposes.[1] 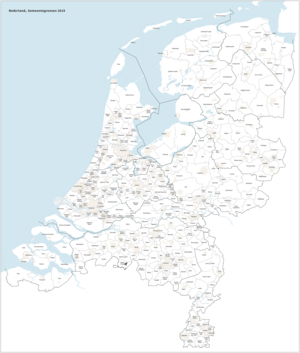 Official municipal boundaries were first drawn up in 1832 in the Netherlands after a cadastre was formed. The Municipalities Act of 1851, written by prime minister Thorbecke, led to the disappearance of small municipalities. Throughout the years, less populous municipalities have been merged. They were either added to the larger neighbouring cities or multiple smaller municipalities merged into a larger new municipality with a new name. The number of municipalities reduced from 1,209 in 1850 to 537 in 2000; as of 2019[update] there are 355 municipalities. During this time, multiple mergers occurred simultaneously in large parts of individual provinces; the municipal boundaries were basically redrawn in these regions.[12][1][14] In the 19th and large parts of the 20th century, municipal mergers were forced by the central government. This policy changed in the end of the 20th century; local support for the merger is now a large part of the decision-making process. The larger, merged municipalities are intended to handle an increasing workload because more public services are delegated from higher levels of government to the municipalities. Another reason for municipal mergers is the assumption that larger municipalities are more efficient in performing their tasks than smaller ones.[14][15]

Municipalities have the right to decentralize themselves and form submunicipalities as an additional level of government. This right and the submunicipalities will cease to exist in the near future to reduce the number of levels of government.[16] Only Amsterdam,[17] where the districts are called stadsdelen, and Rotterdam,[18] where the districts are called deelgemeenten, consist of such formal subdivisions. The Hague,[19] Almere,[20] Breda, Eindhoven,[21] Enschede, Groningen,[22] Nijmegen,[23] Tilburg,[24] and Utrecht have instituted stadsdelen as well, although they do not have the same legal submunicipal status. For administrative use by municipalities and data collection by Statistics Netherlands all municipalities are subdivided into districts (wijken), which in turn are subdivided into neighbourhoods (buurten).[25] These subdivisions have, in contrast to the submunicipalities, no formal status. 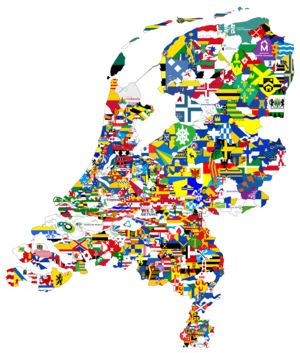 Flags of municipalities of the Netherlands