International agreement between the United States and the Pacific Island nations of the Federated States of Micronesia, the Marshall Islands, and Palau 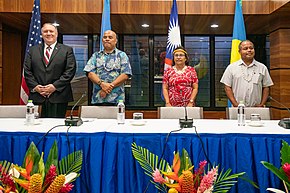 The Compact of Free Association (COFA) is an international agreement establishing and governing the relationships of free association between the United States and the three Pacific Island sovereign states of the Federated States of Micronesia, the Marshall Islands, and Palau. As a result, these nations are sometimes known as the Freely Associated States.

These nations, together with the Commonwealth of the Northern Mariana Islands, formerly composed the Trust Territory of the Pacific Islands, a United Nations trusteeship administered by the United States Navy from 1947 to 1951 and by the U.S. Department of the Interior from 1951 to 1986 (to 1994 for Palau).

The compact came into being as an extension of the U.S.–U.N. territorial trusteeship agreement, which obliged the federal government of the United States "to promote the development of the people of the Trust Territory toward self-government or independence as appropriate to the particular circumstances of the Trust Territory and its peoples and the freely expressed wishes of the peoples concerned".[1] Under the compact, the U.S. federal government provides guaranteed financial assistance over a 15-year period administered through its Office of Insular Affairs in exchange for full international defense authority and responsibilities.

The Compact of Free Association was initialed by negotiators in 1980 and signed by the parties in the years 1982–1983.[2] It was approved by the citizens of the Pacific states in plebiscites held in 1983.[3] Legislation on the Compact was adopted by the U.S. Congress in 1986 and signed into law on November 13, 1986.[4]

Each of the associated states actively participate in all Office of Insular Affairs technical assistance activities. The U.S. treats these countries uniquely by giving them access to many U.S. domestic programs,[5] including disaster response and recovery and hazard mitigation programs under the Federal Emergency Management Agency, some U.S. Department of Education programs including the Pell Grant, and services provided by the National Weather Service, the United States Postal Service, the Federal Aviation Administration, the Federal Communications Commission, and U.S. representation to the International Frequency Registration Board of the International Telecommunication Union.[6] The Compact area, while outside the customs area of the United States, is mainly duty-free for imports.[7]

Most citizens of the associated states may live and work in the United States, and most U.S. citizens and their spouses may live and work in the associated states.[8][9] In 1996, the U.S. Personal Responsibility and Work Opportunity Act removed Medicaid benefits for resident foreigners from the states, even after the five-year waiting period that most other resident aliens have.[10]

The COFA allows the United States to operate armed forces in Compact areas and to demand land for operating bases (subject to negotiation), and excludes the militaries of other countries without U.S. permission. The U.S. in turn becomes responsible for protecting its affiliate countries and responsible for administering all international defense treaties and affairs, though it may not declare war on their behalf. It is not allowed to use nuclear, chemical, or biological weapons in Palauan territory.[11] In the territories of the Marshall Islands and the Federated States of Micronesia it is not allowed to store such weapons except in times of national emergency, state of war, or when necessary to defend against an actual or impending attack on the U.S., the Marshall Islands, or the Federated States of Micronesia.[12]

Citizens of the associated states may serve in America's armed forces, and there is a high level of military enlistment by Compact citizens. For example, in 2008, the Federated States of Micronesia had a higher per-capita enlistment rate than any U.S. state, and had more than five times the national per-capita average of casualties in Iraq and Afghanistan (9 soldiers out of a population of 107,000).[13]

In 2003, the Compacts with the RMI and FSM were renewed for 20 years. These new Compacts provided US$3.5 billion in funding for both countries. US$30 million will also be disbursed annually among American Samoa, Guam, Hawaii, and the Northern Mariana Islands in "Compact Impact" funding. This funding helps the governments of these localities cope with the expense of providing services to immigrants from the RMI, FSM, and Palau. The U.S. usage of Kwajalein Atoll for missile testing was renewed for the same period.[14] The new Compacts also changed certain immigration rules. RMI and FSM citizens traveling to the U.S. are now required to have passports. The U.S. Postal Service was given the option to apply international postage rates for mail between the U.S. and RMI/FSM (phased in over five years). The USPS began implementing the change in January 2006, but decided to resume domestic services and rates in November 2007.[15]

Map of the Trust Territory of the Pacific Islands (1961)

The economic provisions of the Compact for Palau which provided $18 million in annual subsidies and grants, expired on September 30, 2009, and the renewal talk was concluded in late 2010.[17] U.S. financial support for Palau is based on a continuing resolution passed by the U.S. Congress.[18] The Compact Trust Fund set up to replace U.S. financial aid underperformed because of the Great Recession.[19] The military and civil defense provisions remained until 2015.[20]

The government of the United States unincorporated territory of Guam, led by Governor Eddie Calvo, is currently campaigning for a plebiscite on Guam's future political status, with free association following the model of the Marshall Islands, Micronesia, and Palau as one of the possible options.[23][24]

The United States' administration of the former trust territories now covered under the Compacts of Free Association has been subject to ongoing criticism over the past several decades. A 1961 United Nations mission report initially noted deficiencies in "American administration in almost every area: poor transportation, failure to settle war damage claims; failure to adequately compensate for land taken for military purposes; poor living conditions[;] inadequate economic development; inadequate education programs; and almost nonexistent medical care."[25] In 1971, congresswoman Patsy Mink further noted that "[A]fter winning the right to control Micronesia, [the U.S.] proceeded to allow the islands to stagnate and decay through indifference and lack of assistance. . . . [T]he people are still largely impoverished and lacking in all of the basic amenities which we consider essential – adequate education, housing, good health standards, modern sanitation facilities."[26]

After the compacts, criticism was also received by the United States House Foreign Affairs Subcommittee on Asia and the Pacific regarding the unfulfilled commitments of the United States to address the impacts of U.S. nuclear testing in the Marshall Islands, which were included as part of the Pacific Proving Grounds. Speakers noted that while section 177 of the Compact of Free Association recognized the United States' responsibility "to address past, present and future consequences of the nuclear testing claims," less than $4 million was awarded out of a $2.2 billion judgement rendered by a Nuclear Claims Tribunal created under the RMI Compact, and the United States Court of Claims had dismissed two lawsuits to enforce the judgement.[27] With respect to these unaddressed claims, medical practitioners also noted the potential widespread impacts of nuclear testing within the Pacific Proving Grounds, indicated by the prevalence of both radiogenic diseases, as well as heart disease, diabetes, and obesity associated with "[a] forced changed in dietary patterns and lifestyle" resulting from U.S. administration after the testing.[28][29] In 2011, lawmakers further noted that the U.S. Congress had continuously failed to cover the costs of promised medical care and services to displaced Compact citizens who migrate to the United States for health care, education, and employment opportunities, particularly since the passage of the Personal Responsibility and Work Opportunity Act.[30]

Questions regarding U.S. responsibility have also been raised regarding the issue of numerous derelict war ships and oil tankers abandoned or destroyed by the U.S. military in atolls and islands throughout the Compact area.[31]

In 2009, the State of Hawaii, under the administration of then-Governor Linda Lingle, attempted to restrict health care access for Compact citizens by eliminating all Compact residents of Hawaii from Med-QUEST, the state’s comprehensive Medicaid coverage plan.[32] COFA residents were instead subject to Basic Health Hawaii, a limited health care plan under which "transportation services are excluded and patients can receive no more than ten days of medically necessary inpatient hospital care per year, twelve outpatient visits per year, and a maximum of four medication prescriptions per calendar month. . . . BHH covers dialysis treatments as an emergency medical service only, and the approximate ten to twelve prescription medications dialysis patients take per month are not fully covered. BHH . . . caus[es] cancer patients to exhaust their allotted doctors' visits within two to three months".[33]

Noting that such a policy likely constituted unlawful discrimination in violation of the Equal Protection Clause, federal District Court Judge John Michael Seabright issued a preliminary injunction against the implementation of Basic Health Hawaii.[34] In finding a high likelihood of irreparable harm, Judge Seabright took note of the "compelling evidence that BHH's limited coverage . . . is causing COFA Residents to forego [sic] much needed treatment because they cannot otherwise afford it".[35][36] Lingle's successor, Governor Neil Abercrombie continued the state's appeal of the injunction to the United States Court of Appeals for the Ninth Circuit,[37] which ruled in favor of the state. When the United States Supreme Court refused to hear the case, the Abercrombie administration removed most COFA residents from Med-QUEST and transferred them onto Affordable Care Act plans.[38] In other states, notably Arkansas, which has a significant population of Marshallese, COFA residents have not been eligible for Medicaid.[39]