Travis County is located in south central Texas. As of the 2020 census, the population was 1,290,188. It is the fifth-most populous county in Texas. Its county seat is Austin,[1] the capital of Texas. The county was established in 1840 and is named in honor of William Barret Travis, the commander of the Republic of Texas forces at the Battle of the Alamo. Travis County is part of the Austin–Round Rock–Georgetown Metropolitan Statistical Area. It is located along the Balcones Fault, the boundary between the Edwards Plateau to the west and the Blackland Prairie to the east.

Evidence of habitation of the Balcones Escarpment region of Texas can be traced to at least 11,000 years ago. Two of the oldest Paleolithic archeological sites in Texas, the Levi Rock Shelter and Smith Rock Shelter, are in southwest and southeast Travis County, respectively.[2] Several hundred years before European settlers arrived, a variety of nomadic Native American tribes inhabited the area. These indigenous peoples fished and hunted along the creeks, including present-day Barton Springs,[3] which proved to be a reliable campsite.[4] At the time of the first permanent settlement of the area, the Tonkawa tribe was the most common, with the Comanches and Lipan Apaches also frequenting the area.[5]

The region (along with all of modern Texas) was claimed by the Spanish Empire in the 1600s, but at the time no attempt was made to settle the area (or even to fully explore it).[6] In 1691 Domingo Terán de los Ríos made an inspection tour through East Texas that likely took him through Travis Country. The first European settlers in the area were a group of Spanish friars who arrived from East Texas in July 1730. They established three temporary missions, La Purísima Concepción, San Francisco de los Neches and San José de los Nazonis, on a site by the Colorado River near Barton Springs. The friars found conditions undesirable and relocated to the San Antonio River within a year of their arrival.[7]

In 1821 Mexico won its independence from Spain, and the new government enacted laws encouraging colonists to settle the Texas frontier by granting them land and reduced taxation. Over the next decade, thousands of foreign immigrants (primarily from the United States) moved into Texas; in particular, American empresario Stephen F. Austin established one of his colonies near what is now Bastrop, Texas (in future Travis County) in 1827.[8] Josiah and Mathias Wilbarger, Reuben Hornsby, Jacob M. Harrell, and John F. Webber were early settlers who moved into the area in the early 1830s.

In 1836 Texas declared and won its independence from Mexico, forming a new Republic of Texas. After Texas Vice President Mirabeau B. Lamar visited central Texas during a buffalo-hunting expedition between 1837 and 1838, he proposed that the republic's capital (then located in Houston) be relocated to a site on the north bank of the Colorado River. In 1839 the site was officially chosen as the republic's new capital and given the name Waterloo, Texas; shortly thereafter the city's name was changed to Austin in honor of Stephen F. Austin.[9] A new county was also established the following year, of which Austin would be the seat; the county was named Travis County, after William B. Travis. Though the Republic's capital moved briefly back to Houston during the events surrounding the Texas Archive War, by 1845 Austin was again the capital, and it became the capital of the new State of Texas when Texas was annexed by the United States later that year.

In 1861 Travis County was one of the few Texas counties to vote against secession from the Union. Since the majority of the state did favor secession, Travis County then became a part of the Confederacy for the duration of the Civil War. After the Confederacy's defeat, Texas was fully readmitted to the Union in 1870.

From the end of the Civil War to the early twenty-first century, Travis County has experienced steady, rapid population growth (averaging more than a 36% increase every decade from 1870 to 2010), driven largely by the growth of Austin and its suburbs; it is now the fifth most populous county in Texas, after Harris (Houston), Dallas, Tarrant (Fort Worth) and Bexar (San Antonio) counties. 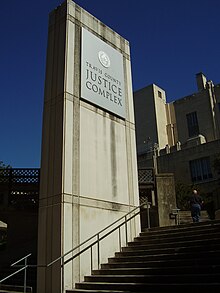 Travis County straddles the Balcones Fault, the boundary between the Edwards Plateau to the west and the Texas Coastal Plain to the east. The western part of the county is characterized by the karst topography of the Texas Hill Country, while the eastern part exhibits the fertile plains and farmlands of the Blackland Prairie. The Colorado River meanders through the county from west to east, forming a series of man-made lakes (Lake Travis, Lake Austin, and Lady Bird Lake).

The limestone karst geology of the western and southwestern parts of Travis County gives rise to numerous caverns and springs, some of which have provided shelter and water for humans in the region for thousands of years. Notable springs in the county include Barton Springs, Deep Eddy and Hamilton Pool.

Note: the US Census treats Hispanic/Latino as an ethnic category. This table excludes Latinos from the racial categories and assigns them to a separate category. Hispanics/Latinos can be of any race. 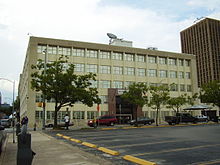 Like other Texas counties, Travis County is governed by a Commissioners' Court composed of the county judge and four county commissioners. The court levies county taxes and sets the budgets for county officials and agencies. The judge and commissioners are elected for four-year terms (the judge at-large, and the commissioners from geographic precincts). The other major county-wide official is the county clerk, who maintains the county's records, administers elections, and oversees legal documentation (such as property deeds, marriage licenses and assumed name certificates). The clerk is also elected at-large for a four-year term.

The Texas Department of Criminal Justice operates the Travis County Unit, a state jail for men, in eastern Austin.[24] 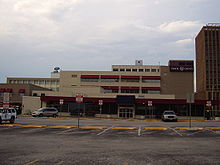 A county complex at 1010 Lavaca Street

As of 2017, Travis County had a median household income of $68,350 per year, and a per capita income of $38,820 per year. 13.9% of the population lived below the poverty level.[14] The county's largest employers are governments (the State of Texas, the US Federal Government, Travis County and the City of Austin) and public education bodies. Other major employers are concentrated in industries relating to semiconductors, software engineering and healthcare.[25]

The largest university in Travis County is the University of Texas at Austin. Other universities include St. Edward's University, Huston–Tillotson University, and Concordia University Texas.

Under Texas law Austin Community College District (ACC) is the designated community college for most of the county. However areas in Marble Falls ISD are zoned to Central Texas College District.[28]

Central Health, a hospital district, was established in 2004.[29] Brackenridge Hospital was originally built as the City-County Hospital in 1884 but Travis County ended its share of the ownership in 1907.[30] In 2017 Brackenridge was replaced by the Dell Seton Medical Center.[31]

Travis County is one of the most consistently Democratic counties in Texas, having voted for the Democratic presidential nominee in twelve of the last fifteen elections since 1960. The only exceptions have been the Republican landslide years of 1972 and 1984, when Richard Nixon and Ronald Reagan each won 49 out of 50 states, and 2000, when the Republican nominee was incumbent Texas Governor George W. Bush. In 2005 Travis County was the only county in Texas to vote against the Proposition 2 state constitutional amendment banning gay marriage, with slightly under 60% of voters being against it.[32] In 2020, Travis County backed Democrat Joe Biden with nearly 72% of the vote, which was the highest percentage he received in any Texas county, and the largest percentage received by any winner of the presidential election in the county since 1948.

The county's Democratic advantage is not limited to the presidential level, as all of the county-level officials and state representatives are Democrats.[33]