The Hill is an American newspaper and digital media company based in Washington, D.C. that was founded in 1994.[2][4] In 2020, it was the largest independent political news site in the United States.

Focusing on politics, policy, business and international relations, The Hill's coverage includes the U.S. Congress, the presidency and executive branch, and election campaigns.[5] The Hill describes its output as "nonpartisan reporting on the inner workings of Government and the nexus of politics and business".[6]

The company's primary outlet is TheHill.com. The Hill is additionally distributed in print for free around Washington, D.C. and distributed to all congressional offices. It is owned by Nexstar Media Group.

The company was founded as a newspaper in 1994 by Democratic power broker and New York businessman Jerry Finkelstein, and Martin Tolchin, a former correspondent for The New York Times.[7] New York Representative Gary L. Ackerman was also a major shareholder.[7] The name of the publication alludes to "Capitol Hill" as a synecdoche for the United States Congress and government generally.[8][7]

The Hill has grown to become the second most-viewed US political news website and the third-most tweeted U.S. news source.[9]

In 2016, The New York Times reported that The Hill was "proceeding with ambitious expansion plans" to become a national brand publication, and its website traffic increased 126% over the prior year, and was above Politico's traffic for the period.[10]

Following the 2016 US presidential election, The Street reported that The Hill saw the largest increase in online political readership among political news sites, with an increase of 780%. CNN and Politico saw smaller increases over the period,[11] making The Hill "the fastest-growing political news site".[12] In 2017, The Hill was also cited by Twitter as one of the top 10 "most-tweeted" news sources.[13] A 2017 study by the Berkman Klein Center for Internet & Society at Harvard University found that The Hill was the second most-shared source among supporters of Donald Trump on Twitter during the election, behind Breitbart News.[14][15]

In 2019, The Hill was ranked second among all US news sites for political readership, second to CNN, and ahead of Capitol Hill competitors such as Politico.[16]

In 2020, it was again ranked second for online politics readership across all news sites, behind only CNN. It remained ahead of Politico, Fox News, NBCNews.com and MSNBC TV.[17] 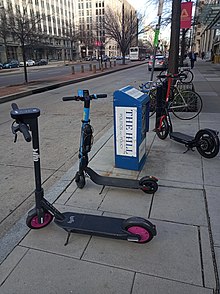 Vending box for The Hill on K Street.

As of 2020, the newspaper claims to have more than 22,000 print readers.[2] The Hill is distributed for free in newspaper boxes around the U.S. Capitol building, and mailed directly to all congressional offices.

In June 2018, The Hill launched Hill.TV, a digital news channel. The channel features Rising, a daily morning news program first hosted by Krystal Ball and Saagar Enjeti.[20] In May 2021, Ball and Enjeti announced they were departing in order to release their own independent project, Breaking Points with Krystal and Saagar.[20][21][22] Since then, Robby Soave, Ryan Grim and Kim Iversen have hosted the program[23], along with regular guests including Emily Jashinsky, Colin Rogero, Jamal Simmons, Emily Miller, Alyssa Farah, Briahna Joy Gray, and Rachel Bovard.

The National Press Club's annual Sandy Hume Memorial Award is named after staffer Sandy Hume, in recognition of his 1997 reporting in The Hill of an attempted Republican coup against then-speaker Newt Gingrich.[24]

In 2019, The Hill won the Society of Professional Journalists' First Prizes for Features ("Celebrities dive into midterms, hoping to thwart Trump") and Series ("How The Trump Tax Law Passed").[25]

In 2020, The Hill won the Society of Professional Journalists' First Prize for Features, for the story "Inside the Secret World of the CIA's Social Media Team".[26]

In 2017, The Hill hired John Solomon.[27] Solomon inserted material from advertisers into journalistic copy, leading to protests from The Hill's publisher.[28] Solomon's role was changed to opinion contributor.[29] In March 2018 he published a challenged conspiracy theory regarding Ukraine.[28] In September 2019, Solomon left The Hill.[27]

In January 2019, WarnerMedia's CNN claimed Finkelstein interfered in the editorial independence of the paper with respect to criticism of U.S. President Donald Trump.[27]