Edward Miner "Ned" Lamont Jr.[1] (born January 3, 1954) is an American businessman and politician serving as the 89th governor of Connecticut since January 9, 2019.[2][3] A member of the Democratic Party, he served as a Greenwich selectman from 1987 to 1989. He ran for the United States Senate in 2006, defeating incumbent Joe Lieberman in the Democratic primary, but losing to him in the general election, when Lieberman ran as a third-party candidate.[4]

Lamont was born on January 3, 1954, in Washington, D.C., to Camille Helene (née Buzby) and Edward Miner Lamont. His mother was born in San Juan, Puerto Rico to parents from the U.S. mainland, and later worked as a staffer for Senator Estes Kefauver.[5] His father, an economist, worked on the Marshall Plan and then served in the Department of Housing and Urban Development during the Nixon administration.[6] He is the great-grandson of former J. P. Morgan & Co. chair Thomas W. Lamont[7][8] and a grand-nephew of former American Civil Liberties Union director Corliss Lamont.[9] He is a distant descendant of colonial diarist Thomas Minor, from whom he gets his middle name.[10][a]

Lamont's family moved to Laurel Hollow on Long Island when he was seven years old.[b] The eldest of three children, he and his sisters attended East Woods School.[5][12] He later attended Phillips Exeter Academy, and served as president of the student newspaper, The Exonian. After graduating from Phillips Exeter in 1972, he earned a Bachelor of Arts in sociology from Harvard College in 1976 and a Master of Business Administration from the Yale School of Management in 1980.[12][13]

In 1977, Lamont became editor for the Black River Tribune, a small weekly newspaper in Ludlow, Vermont. During his time there, he worked alongside journalists Jane Mayer and Alex Beam.[14] After graduating from Yale, he entered the cable television industry, managing the startup operation in Fairfield County, Connecticut, for Cablevision.[13] In 1984, he founded Campus Televideo, a company that provides cable and satellite services to college campuses across the country.[15][16] He later chaired Lamont Digital Systems, a telecommunications firm that invests in new media startups.[17][18] Campus Televideo was its largest division before Austin, Texas-based firm Apogee acquired it on September 3, 2015.[19][16]

Lamont has served on the board of trustees for the Conservation Services Group,[20] Mercy Corps,[21] the Norman Rockwell Museum,[22] the YMCA, and the Young Presidents' Organization.[23] He has also served on the advisory boards of the Yale School of Management[24] and the Brookings Institution.[23]

Lamont was first elected in 1987 as a selectman in Greenwich, Connecticut, where he served for one term. He ran for state senate in 1990, against Republican William Nickerson and incumbent Emil "Bennie" Benvenuto (who had switched his party affiliation from Republican to A Connecticut Party).[25] Nickerson won the three-way race with Lamont finishing third.[26] Lamont later served for three terms on the Greenwich town finance board and chaired the State Investment Advisory Council, which oversees state pension fund investments.[27][28] 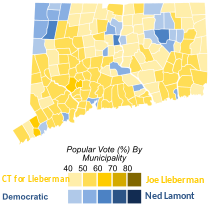 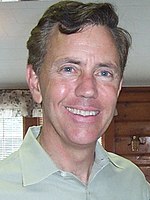 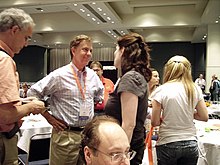 Lamont attending the 2007 YearlyKos conference at the McCormick Place in Chicago.

On March 13, 2006, Lamont announced his campaign for the U.S. Senate against incumbent Joe Lieberman.[29]

On July 6, Lamont debated Lieberman on television, covering issues such as the Iraq War, energy policy, and immigration. During the debate, Lieberman argued he was being subjected to a litmus test on the war, insisted he was a "bread-and-butter Democrat," and on many occasions asked, "who is Ned Lamont?" Lieberman then asked Lamont if he would release his income tax returns, which he did afterward.[30]

Lamont focused on Lieberman's supportive relationship with Republicans, telling him "if you won't challenge President Bush and his failed agenda, I will." He criticized Lieberman's vote for the Energy Policy Act of 2005, which he dubbed the "Bush–Cheney–Lieberman energy bill." In response to the assertion that he supported Republican policies, Lieberman stated he had voted with Senate Democrats 90% of the time. Lamont argued the three-term incumbent lacked the courage to challenge the Bush administration on the Iraq War.[30] He also criticized Lieberman for supporting federal intervention in the Terri Schiavo case.[31][32]

On July 30, The New York Times editorial board endorsed Lamont.[33] The same day, The Sunday Times reported that Bill Clinton warned Lieberman not to run as an independent if he lost the primary to Lamont.[34] Pledging to refuse money from lobbyists during the election, Lamont funded most of his own campaign, with donations exceeding $12.7 million.[35][36]

Lamont won the primary with 52% of the vote[37] (this was the only Senate race in 2006 where an incumbent lost re-nomination). In his concession speech, Lieberman announced he was standing by his earlier statements that he would run as an independent if he lost the primary.[38] Running under the banner of Connecticut for Lieberman, Lieberman won the general election with nearly 50% of the vote (exit polls showed Lieberman won 33% of Democrats, 54% of independents, and 70% of Republicans).[39] The Sundance Channel documentary film Blog Wars chronicled the influence political blogging had on the election.[40]

While some Research 2000 polls commissioned by the Daily Kos in 2007 and 2008 found he would win a Senate rematch with Lieberman by growing margins,[41][42] Lamont said he was not considering another campaign for Senate.[43]

Lamont initially supported Chris Dodd's presidential campaign.[44][45] After Dodd dropped out of the race, Lamont became a state co-chair for Barack Obama's presidential campaign.[46] Obama's victory in the Connecticut Democratic primary was credited to Lamont's ability to turn out the voter base he had built during his Senate campaign.[47] In March 2008, he was a state delegate to the 2008 Democratic National Convention, his support pledged to Obama.[48] 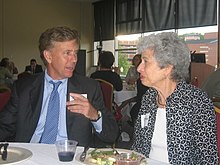 Before the 2006 election, Lamont volunteered at Warren Harding High School in Bridgeport, where he focused on teaching entrepreneurship and coordinating internships with local businesses.[49][50] After the election, he served as a teaching fellow at the Harvard Institute of Politics[51] and the Yale School of Management. He then became an adjunct faculty member and chair of the Arts and Sciences Public Policy Committee at Central Connecticut State University (CCSU), where he was named Distinguished Professor of Political Science and Philosophy.[50] During his time at CCSU, he was a lecturer in multiple classes and founded a business startup competition.[50][52] In 2019, he delivered the commencement speech for CCSU, his first as governor.[53]

On February 16, 2010, Lamont announced his candidacy for the 2010 gubernatorial election.[54] Former Stamford mayor Dannel Malloy defeated him at the state Democratic convention on May 22, with 1,232 votes (68%) to Lamont's 582 (32%). Since he won more than 15% of the vote, Lamont was eligible to appear on the primary election ballot.[55] On August 10, he lost the primary to Malloy, receiving 43% of the vote.[56] Malloy defeated Republican candidate Thomas C. Foley in the general election.[57]

On January 17, 2018, Lamont announced his candidacy to succeed Malloy, who was not seeking a third term.[58][4] He received the party endorsement at the state convention, and chose former Connecticut Secretary of State Susan Bysiewicz as his running mate. While missing the 15% threshold, Bridgeport mayor and ex-convict Joe Ganim gathered enough signatures to appear on the Democratic primary ballot.[59] Despite the challenge, Lamont won the primary by over 130,000 votes (a 62.4% margin).[4][60] He then faced Republican Bob Stefanowski and independent Oz Griebel in the general election on November 6. Later that night, Greibel conceded the election; Stefanowski conceded early the next morning.[3]

Lamont was sworn in as the 89th governor of Connecticut on January 9, 2019, succeeding Dannel Malloy.[61] Some of his top priorities include implementing electronic tolls on state highways, taxing online streaming services, restoring the property tax credit, legalizing marijuana for recreational usage, increasing the minimum wage to $15 per hour, instituting paid family and medical leave, renegotiating contracts with public-sector unions, and legalizing sports betting.[62] His proposal to implement electronic tolling on state highways has been viewed unfavorably by residents and faced opposition from fellow Democrats in the General Assembly.[63][64]

Lamont has also prioritized investments in rail infrastructure, proposing shorter travel times between cities by upgrading rail lines, as well as extending the Danbury Branch to New Milford and re-electrifying the line.[65][66]

In April 2019, Lamont signed his first executive order, which directs state office buildings and vehicle fleets to become more energy-efficient through an expanded “Lead By Example Sustainability Initiative." The initiative aims to reduce both the carbon footprint and cost of state government operations.[70] On May 29, he signed a bill that raised the state minimum wage to $11 an hour that October and to $15 an hour by 2023.[71] On June 3, he signed three gun control bills, including Ethan's Law, which requires safely storing firearms in households where children are present, bans ghost guns, and bans storing unlocked guns in unattended vehicles.[72] The same month, he signed a bill that banned gay panic defense in Connecticut.[73][74][75]

In the aftermath of the 2019 Boeing B-17 Flying Fortress crash, which resulted in seven deaths and six injuries, Lamont joined Senator Richard Blumenthal in offering condolences to the families affected and ensuring them that the NTSB would launch a thorough investigation.[76] He later met with the first responders to thank them for their service.[77]

In July 2020, Lamont signed into law a sweeping police reform bill that requires all police officers to be equipped with body cameras, prohibits maneuvers such as chokeholds, creates a statewide watchdog for police misconduct, limits police departments' ability to withhold disciplinary records, and makes individual officers liable in civil lawsuits.[78]

In his first year as governor, Lamont garnered consistently low approval ratings. Morning Consult has listed him among the ten least popular governors every quarter since his election. In a survey conducted in the last quarter of 2019, he was ranked the fourth most unpopular governor in the country, with a 51% disapproval rating and a 32% approval rating.[79]

On September 10, 1983,[83] Lamont married Ann Huntress, a venture capitalist and managing partner at Oak Investment Partners.[23][84] They have three children: Emily, Lindsay, and Teddy.[23] He and his family live in Greenwich and have a vacation home in North Haven, Maine.[12]

The Lamont Gallery on the campus of Phillips Exeter Academy and the Lamont Library at Harvard University are both named in honor of his family.[12]