listen)) is a social welfare organization based in Washington, D.C., that advocates for the reform of marijuana laws in the United States regarding both medical and non-medical use. According to their website, NORML supports "the removal of all penalties for the private possession and responsible use of marijuana by adults, including cultivation for personal use, and casual nonprofit transfers of small amounts" and advocates for "the creation of a legal and regulatory framework for marijuana's production and retail sale to adults".[1] NORML also has a sister organization, NORML Foundation, that focuses on educational efforts and providing legal assistance and support to people affected negatively by current marijuana laws.[2] NORML operates in a number of other countries.

NORML was founded in 1970 by Keith Stroup. It originally started with $5,000 in funding from the Playboy Foundation. Since then, the organization has played a central role in the cannabis decriminalization movement. At the start of the 1970s, the premier decriminalization organizations were Legalize Marijuana, better known as LeMar, and Amorphia, the two of which merged in 1971.[3] The next year, Amorphia led the unsuccessful campaign for California's marijuana legalization initiative, Proposition 19.[4] In 1974, Amorphia merged with NORML.[3] 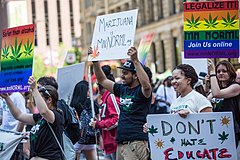 In early 2009, a petition to President Barack Obama was written asking that he appoint a "drug czar" who would treat drug abuse as a health issue rather than a criminal issue and will move away from a "War on Drugs" paradigm. NORML's goal for this petition was 100,000 signatures.

Also in early 2009, when the Kellogg Company dropped its contract with Olympic swimmer Michael Phelps after pictures of his use of a bong surfaced in the media, head members of NORML began boycotting Kellogg products and urging all members and supporters of NORML to boycott Kellogg, until the company reversed the decision. NORML also suggested that supporters of the cause send emails or letters to Kellogg explaining the boycott and the reasons behind it, and providing a template for emails and letters. Although Kellogg's profits did not suffer in the first quarter of 2009,[8] consumer ratings polls at Vanno[9] have been cited as indicating that Kellogg's reputation has suffered. Specifically, a small poll of Kellogg's brand reputation at Vanno showed a drop from its previous rank of 9 to 83 after Kellogg decided not to renew its contract with Phelps.[10][11]

On February 15, 2010, a 15-second flash animation from NORML discussing the potential economic and financial benefit of legalized marijuana was deemed by CBS to be "too political" to display on billboards in New York City's Times Square. This drew criticism in the blogosphere and accusations of hypocrisy on Twitter, since CBS had recently aired an anti-abortion television spot during the 2010 Super Bowl.[12] CBS reversed its decision and the ad was debuted on the CBS Times Square Superscreen on April 20, 2010.[13]

The NORML Foundation is a 501(c)(3) organization,[14] that conducts educational and research activities. Examples of the NORML Foundation's advocacy work is a detailed 2006 report, Emerging Clinical Applications For Cannabis.[15] A comprehensive report with county-by-county marijuana arrest data, Crimes of Indiscretion: Marijuana Arrest in America, was published in 2005.[16]

In October 1998, NORML Foundation published the NORML Report on U.S. Domestic Marijuana Production that was widely cited in the mainstream media. The report methodically estimated the value and number of cannabis plants grown in 1997, finding that Drug Enforcement Administration, state and local law enforcement agencies seized 32% of domestic cannabis plants planted that year. According to the report, "Marijuana remains the fourth largest cash crop in America despite law enforcement spending an estimated $10 billion annually to pursue efforts to outlaw the plant."[17] Recent studies show that marijuana is larger than all other cash crops combined.[18]

In 2002, the organization used ads containing quotes by New York City mayor Michael Bloomberg on his past use of cannabis, saying "You bet I did. And I enjoyed it." The mayor said "I’m not thrilled they’re using my name. I suppose there’s that First Amendment that gets in the way of me stopping it," but maintained that the NYPD will continue to vigorously enforce the laws.[19]