Marion Michael Rounds (born October 24, 1954) is an American businessman and politician serving as the junior United States Senator from South Dakota since 2015. A member of the Republican Party, he served as the 31st governor of South Dakota from 2003 to 2011, and in the South Dakota Senate from 1991 to 2001. In 2014, Rounds was elected to the United States Senate, succeeding retiring Democrat Tim Johnson. He was reelected in 2020 over Democratic nominee Dan Ahlers.[1]

The eldest of 11 children, Rounds was born in Huron, South Dakota, the son of Joyce (née Reinartz) and Don Rounds.[2] He has German, Belgian, Swedish and English ancestry.[2] Rounds has lived in the state capital of Pierre since he was three years old. He was named for an uncle, Marion Rounds, who was killed in the Pacific theater during World War II.[3] Several members of the Rounds family have been involved in state government. His father worked at various times as state director of highway safety, a staffer for Rural Electrification Administration, and executive director of the South Dakota Petroleum Council.[4] His brother Tim Rounds is a member of the South Dakota Legislature, representing District 24, which includes Pierre.[5][6]

Rounds attended South Dakota State University in Brookings, where he earned his Bachelor of Science in political science.[3]

Rounds is a former partner in Fischer Rounds & Associates, an insurance and real estate firm with offices in Pierre, Rapid City, Mitchell, Watertown and Sioux Falls.[7]

Rounds represented Hughes, Lyman, Stanley, and Sully counties. In 1993, he became Senate Minority Whip. In 1995, his peers selected him to be Senate Majority Leader.[10] 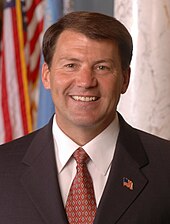 But the contest between Kirby and Barnett soon became very negative and dirty. Barnett attacked Kirby for not investing in companies based in South Dakota and for his involvement with Collagenesis, a company which removed skin from donated human cadavers and processed them for use. It became the subject of a scandal when it was revealed that the company was using the skins for much more lucrative cosmetic surgery such as lip and penis enhancements while burn victims "lie waiting in hospitals as nurses scour the country for skin to cover their wounds, even though skin is in plentiful supply for plastic surgeons".[16] Kirby invested in the company after the scandal broke and Barnett attacked him for it in television advertisements,[17] but the advertisements backfired because "the claims were so outlandish that people thought for sure that they were exaggerated or completely fabricated."[18]

Rounds was elected governor on November 5, 2002. The results were as follows:[19]

The Rounds/Daugaard ticket was reelected on November 7, 2006. The results were as follows:[20]

Rounds served as a member of the Governors' Council at the Bipartisan Policy Center.[21] He was the 2008 Chair of the Midwestern Governors Association.[22]

On February 22, 2006, the state legislature of South Dakota passed an act banning all medical abortions except those necessary to save the mother's life. Rounds signed the act on March 6 and the ban was to have taken effect on July 1, 2006, but did not, because of a court challenge. A referendum on repealing H.B. 1215 was placed on the ballot for the November 2006 statewide election due to a petition.[24] On May 30, over 38,000 signatures were filed, more than twice the 17,000 required to qualify. Voters repealed the law on November 7, 2006, the day of Rounds's reelection.[25]

During Rounds's administration, South Dakota offered green cards to foreign investors in exchange for investments in a new South Dakota beef packing plant and other economic investments through the EB-5 visa program the federal government established in 1990.[26][27] After the beef packing plant went bankrupt, questions emerged about the nature of the investments and the foreign investors. Some investors received neither their EB-5 visas nor the money back from their failed investments, with no indication as to where their money went.[28]

State officials misused funds to pay for their salaries, did not disclose that they owned companies which they gave contracts to, directed money to companies that went bankrupt and arranged for loans from unknown sources from shell companies located in tax havens.[29][30][31] In October 2014, Rounds admitted that he had approved a $1 million state loan to beef packing plant Northern Beef shortly after learning that Secretary of Tourism and State Development Richard Benda had agreed to join the company, with Benda then getting another $600,000 in state loans that was ultimately used to pay his own salary.[32][33] Benda committed suicide in October 2013, days before a possible indictment over embezzlement and grand theft charges.[34]

Of 3D-printed weapons, Rounds has said, “This is a new technology which you’re not going to put back into the bottle. It is there.” He has suggested creating and using new technologies, such as metal detectors that can also recognize plastic, in schools, airports and other public places.[35]

Speculation persisted that in 2008 Rounds would seek the United States Senate seat held by Tim Johnson, a Democrat who had served since 1997. Johnson opted not to run for reelection.[36]

In November Rounds was elected with a majority of the vote. The results were:[42]

In the 2020 election, Rounds defeated Scyller Borglum to win the Republican nomination.[43] He won the general election over Democrat Dan Ahlers with nearly 66% of the vote.[44]

In February 2019, Rounds was one of 20 senators to sponsor the Employer Participation in Repayment Act, enabling employers to contribute up to $5,250 to their employees' student loans as a means of granting them relief and incentivizing people to apply for jobs with employers who implement the policy.[45]

In 2017, Rounds was one of 22 senators to sign a letter[46] to President Donald Trump urging him to withdraw the United States from the Paris Agreement. According to the Center for Responsive Politics, Rounds has received over $200,000 from oil, gas and coal interests since 2012.[47] Rounds supported embattled Environmental Protection Agency Administrator Scott Pruitt, who had come under scrutiny because of extraordinary expenditures for personal security and luxury travel, and the appearances of ethical conflicts, defending him on Meet the Press. Calling the criticism "nitpicking," he said, “I don’t know how much of it is overblown and how much of it is accurate, to be honest.”[48]

In March 2018, Rounds co-sponsored the Israel Anti-Boycott Act (s. 720), which would make it a federal crime for Americans to encourage or participate in boycotts against Israel and Israeli settlements in the West Bank if protesting actions by the Israeli government.[50][51]

Rounds opposes the Affordable Care Act (Obamacare), and has voted to repeal it.[52] In 2019, he said he supported lawsuits seeking to overturn it.[53]

2021 storming of the United States Capitol[edit]

On May 28, 2021, Rounds abstained from voting on the creation of an independent commission to investigate the January 6 insurrection.[54]

While attending South Dakota State University, Rounds met his wife, Jean, formerly of Lake Preston, South Dakota. They were married in 1978 and have four children. He is the older brother of Tim Rounds.

Rounds is a member of Sts. Peter and Paul Catholic Church of Pierre. He is also a member of numerous service clubs and community organizations, including Elks, Exchange Club, Knights of Columbus and Ducks Unlimited.