The Michigan Senate is the upper house of the Michigan Legislature. Along with the Michigan House of Representatives, it composes the state legislature, which has powers, roles and duties defined by Article IV of the Michigan Constitution, adopted in 1963.[1] The primary purpose of the Legislature is to enact new laws and amend or repeal existing laws.

The Michigan Senate is composed of 38 members, each elected from a single-member district with a population of between approximately 212,400 to 263,500 residents.[2] Legislative districts are drawn on the basis of population figures, provided by the federal decennial census. Senators' terms begin immediately upon their election. As of 2018, Republicans hold the majority in the State Senate with twenty-two seats; Democrats hold the minority with sixteen seats. The Senate chamber is located in the State Capitol building.[2]

Senators are elected on a partisan basis for four-year terms, concurrent with the election of the Governor of Michigan. Terms for senators begin on January 1 at noon, following the November general election and end on January 1 when their replacements are sworn in.[2]

Senate elections are always held two years after the election for President of the United States, with the next election scheduled for November 8, 2022.

On November 3, 1992, almost 59 percent of Michigan voters backed Proposal B, the Michigan Term Limits Amendment, which amended the state constitution, to enact term limits on federal and state officials. In 1995, the U.S. Supreme Court ruled that states could not enact congressional term limits, but ruled that the state-level term limits remain. Under the amendment, a person could be elected to the state senate two times. A provision governing partial terms was also included. These provisions became Article IV, section 54 and Article V, section 30 of the Michigan Constitution.[3]

Each senator must be a citizen of the United States, at least 21 years of age, and an elector of the district he represents. Under state law, moving out of the district shall be deemed a vacation of the office. No person who has been convicted of subversion or who has within the preceding 20 years been convicted of a felony involving a breach of public trust shall be eligible for either house of the legislature.

For reckoning periods of time during which the legislature operates, each two-year period coinciding with the election of new members of the House of Representatives is numbered consecutively as a legislature, dating to the first legislature following Michigan's admission as a state. The current two-year term of the legislature (January 1, 2021 – December 31, 2022) is the 101st Legislature.

The Michigan legislature is one of ten full-time state legislative bodies in the United States.[4] Members receive a base salary of $71,685 per year, which makes them the fourth-highest paid legislators in the country, after California, Pennsylvania and New York. While legislators in many states receive per diems that make up for lower salaries, Michigan legislators receive $10,800 per year for session and interim expenses.[5] Salaries and expense allowances are determined by the State Officers Compensation Commission.

The Michigan legislature is authorized by the Michigan Constitution to create and amend the laws of the U.S. state of Michigan, subject to the governor's power to veto legislation. To do so, legislators propose legislation in the forms of bills drafted by a nonpartisan, professional staff. Successful legislation must undergo committee review, three readings on the floor of each house, with appropriate voting majorities, as required, and either be signed into law by the governor or enacted through a veto override approved by two-thirds of the membership of each legislative house.[6]

The Michigan Senate is headed by the Lieutenant Governor of Michigan, who serves as President of the Senate but may cast a vote only in the instance of a tie.[9] The presiding officers of the senate, apart from the president, are elected by the body at its first session and serve until their term of office is up.[10] Majority and minority party officers are elected at the same time by their respective caucuses.[10]

The senate majority leader controls the assignment of committees and leadership positions, along with control of the agenda in the chamber. 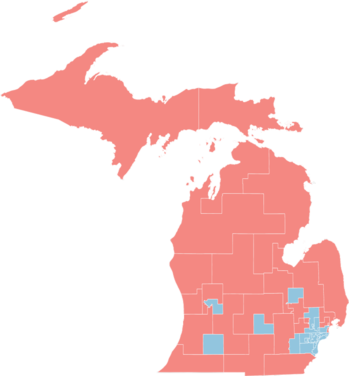 Past composition of the Senate[edit]