The governor has a duty to enforce state laws, and the power to approve or veto bills passed by the Pennsylvania Legislature[3] and to convene the legislature.[4] The governor may grant pardons except in cases of impeachment, but only when recommended by the Board of Pardons.[5]

There have been seven presidents and 47 governors of Pennsylvania, with two governors (Robert E. Pattison and Gifford Pinchot) serving non-consecutive terms, totaling 55 terms in both offices. The longest term was that of the first governor, Thomas Mifflin, who served three full terms as governor in addition to two years as President of the Continental Congress. The shortest term belonged to John Bell, who served only 19 days as acting governor after his predecessor, Edward Martin resigned. The current governor is Tom Wolf, whose term began on January 20, 2015.

Pennsylvania was one of the original thirteen colonies, and was admitted as a state on December 12, 1787. Prior to declaring its independence, Pennsylvania was a colony of the Kingdom of Great Britain; see the list of colonial governors for the pre-statehood period.

Presidents of the Supreme Executive Council[edit]

The first Pennsylvania constitution in 1776 created the Supreme Executive Council as the state's executive branch, with the President of the Commonwealth of Pennsylvania as its head.[6] The president was chosen annually by the council, though with no specific term dates.[7]

The original 1776 constitution created the position of "vice-president", though no provision was made if the office of president became vacant, which occurred four times later. Contemporary sources continue to label the chief executive in such times as the vice president, without any notion of succeeding to the presidency. One acting president, George Bryan, was subsequently recognized later as a full-fledged governor, due to his acting as president for over six months.

Governors of the Commonwealth of Pennsylvania[edit] 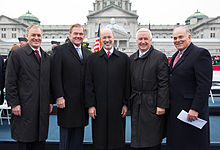 Five governors of the Commonwealth of Pennsylvania who have served since 1995, (left to right): Mark Schweiker, Tom Ridge, Tom Wolf, Tom Corbett and Ed Rendell, pose in front of the south facade of the Pennsylvania State Capitol on the Susquehanna River front in Harrisburg at Wolf's January 2015 gubernatorial inauguration

The 1790 constitution abolished the council and replaced the president with a governor,[8] and established a three-year term for governor commencing on the third Tuesday of the December following the election, with governors not allowed to serve more than nine out of any twelve years.[9] The 1838 constitution moved the start of the term to the third Tuesday of the January following the election, and allowed governors to only serve six out of any nine years.[10] The 1874 constitution lengthened the term to four years, and prohibited governors from succeeding themselves.[11] The current constitution of 1968 changed this to allow governors to serve two consecutive terms, with no lifetime limit.[12]

This is a table of other governorships, congressional and other federal offices, and ranking diplomatic positions in foreign countries held by Pennsylvania governors. All representatives and senators mentioned represented Pennsylvania except where noted.

From Pennsylvania Politicals: Pennsylvania has never used the name "mansion" to describe the governor's official home. Even when the first bill was proposed to purchase a home, the word mansion was not used. Rather, the home was and is designated as a "residence." Even during the 79 years that Keystone Hall was used, it was known simply as that, Keystone Hall. Even today, the home located at 2035 North Front Street is officially known as "The Governor's Residence" not "The Governor's Mansion." The distinction may be both psychological and historical. It may help to remind the governor that he lives in the people's house. It may also remind the electorate that the we, as citizens, own the home and allow the individuals we choose to reside there only temporarily.

As early as 1852, the Pennsylvania House of Representatives proposed funds for "the erection of a dwelling for the residence of the Governor of this Commonwealth." Six years later, on January 18, 1858, Governor Pollock signed the bill authorizing funds for the purchase of a building suitable for the governor. By 1861 and the start of the Civil War, Governor Curtin found the home to be too small to handle the full load of war-related business. Funds were authorized to purchase 313 North Front Street. Governor Curtin and family moved into the residence in 1864.

Twenty years later, the neighboring home was purchased, joined together, and a faux façade was built. Keystone Hall was now a fully functioning residence for the governor. By 1959, the home had fallen into such disrepair that the home was sold and demolished the following year. (The governors used the State House at Indiantown Gap during this period.) Arthur James proposed a new governors residence in 1941. He wanted a grand house built in the William & Mary (Williamsburg) style architecture. However, it took over 25 years for his idea to come to fruition. In 1968, the current residence opened to welcome the Ray Shafer family. It has been the home of the governor ever since.