Skip to content
Legislative branch of the state government of Georgia
For the current session, see 156th Georgia General Assembly. For the legislature of the country of Georgia, see Parliament of Georgia.

The Georgia General Assembly is the state legislature of the U.S. state of Georgia. It is bicameral, consisting of the Senate and the House of Representatives.

Each of the General Assembly's 236 members serve two-year terms and are directly elected by constituents of their district.[2][3] The Constitution of Georgia vests all legislative power with the General Assembly. Both houses have similar powers, though each has unique duties as well.[2] For example, the origination of appropriations bills only occurs in the House, while the Senate is tasked with confirmation of the Governor's appointments.[2]

The General Assembly meets in the Georgia State Capitol in Atlanta.

The General Assembly, which is the legislative branch of the state's government, was created in 1777 during the American Revolution—it is older than the United States Congress. During its existence the Assembly has moved four different times when the state capital changed its location. The first location of the Assembly was Savannah, then Augusta and Louisville, moving from there to Milledgeville, and finally to Atlanta in 1868.[4]

The General Assembly in Savannah[edit]

By January 1777 Savannah had become the capital of Georgia—when the former colony declared independence from Britain. The legislature, then a unicameral body, met there in 1777–1778—retreating to Augusta when the British captured the city. They were not in Augusta long before it was captured by the British in 1779. Augusta changed hands three times during the war, finally returning to American possession in July 1781. They stayed in Augusta until the British left Savannah in May 1782 and the legislature returned to the capital.[4]

Between 1783–95, the Georgia General Assembly met in both Savannah and Augusta—moving from there when tensions arose between the two cities, causing then Governor Lyman Hall to officially reside in both places. On February 22, 1785 the General Assembly held its last meeting in Savannah—Augusta had become the official capital due to pressure from the general populace to have their capital in the center of the state.[4]

As the population dispersed—shifting the geographic center, it was determined that the state's capital needed to move as well. A commission was appointed by the legislature in 1786 to find a suitable location that was central to the new demography. The commission recommended Louisville, which would become Georgia's first planned capital and would hold her first capitol building. Due to the fact that the capital would have to be built from the ground up, and because of numerous construction delays, it took a decade to build the city. The name Louisville was chosen by the General Assembly in honor of King Louis XVI of France for France's aid during the Revolutionary War.

The new state house, a two-story 18th century Gregorian building of red brick, was completed in 1796. The Legislature designated Louisville the "permanent seat" of Georgia's government. Yet, further western expansion created the need for another new state capital. The capitol building was purchased by Jefferson County and used as a courthouse, but the building had to be torn down because it became unsound. A plaque marks the location of the old Capitol.[4]

The Assembly arrives in Milledgeville[edit]

In 1804, the state government decided that yet another capital, would be needed. Subsequently, an act was passed authorizing construction of a new capital city on 3,240 acres (13 km2) in the area currently known as Baldwin County. The city was named Milledgeville in honor of Governor John Milledge.

The new Capitol took two years to complete and was a brick construction in the Gothic Revival style. The legislature convened The Georgia Secession Convention of 1861 in the Milledgeville statehouse on January 16, 1861. On January 19, delegates voted for Georgia to secede from the Union—208 in favor with 89 against—drafting a new constitution, and declaring the state an independent Republic. 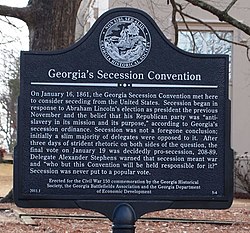 On January 21, Assembly delegates (secessionists finishing with a slight majority of delegates)[5] celebrated their decision by a public signing of the Ordinance of Secession outside of the State Capitol. Later that year, the legislature also voted to send $100,000 to South Carolina for "the relief of Charlestonians" who suffered a disastrous fire in December 1861. With General Sherman's approach, the members of the General Assembly adjourned in fall 1864, reconvening briefly in Macon in 1865. As the American Civil War came to a close with the federal government in military control of Georgia, the legislature reconvened at the Capitol in Milledgeville.[4]

In 1867, Major General John Pope, military governor of Georgia, called for an assembly in Atlanta to hold a constitutional convention. At that time Atlanta officials moved once again to have the city designated as Georgia's state capital, donating the property where Atlanta's first city hall was constructed. The constitutional convention agreed and the people voted to ratify the decision on April 20, 1868. The Georgia General Assembly first convened in Atlanta on July 4, 1868.

In 1884, the legislature appropriated one million dollars to build a new State Capitol. Construction began October 26, 1884 and the building was completed (slightly under budget) and occupied on June 15, 1889.[4]

Notably, the dome atop the capitol building is plated with real gold, most of which came from the Dahlonega, Georgia area.[6] The roofing gives rise to local colloquialisms—for instance, if one knowledgeable Georgian wanted to ask another what the General Assembly was doing, he might ask what was happening "under the gold dome."[7]

Organization and procedure of the General Assembly[edit]

The General Assembly meets in regular session on the second Monday in January for no longer than 40 legislative (rather than calendar) days each year. Neither the House nor the Senate can adjourn during a regular session for longer than three days or meet in any place other than the state capitol without the other house's consent.

Before taking office senators and representatives must swear (or affirm) an oath—stipulated by state law.

A majority of the members to which each house is entitled shall constitute a quorum to transact business. A smaller number may adjourn from day to day and compel the presence of its absent members.

Each house holds the responsibility of judging the election, returns, and qualifications of its own members. Also, each house has the power to punish its own members for disorderly misconduct. Punishments for such conduct include:

However, no member may be expelled except upon a two-thirds vote of the house in which he or she sits.

When a person is guilty of contempt, the individual may be imprisoned if ordered by either the House or the Senate.

All elections of the General Assembly are to be recorded. The recorded vote then appears in the journal of each house.

Sessions of the General Assembly, including committee meetings, are open to the public except when either house makes an exception.

The General Assembly does not publish reports and does not keep bill files. Major legislation is discussed in detail in the Peach Sheets,[11] a student-written part of Georgia State University College of Law's Law Review. Recent Peach Sheet articles are available in an online archive. Otherwise, Peach Sheets articles should be included in the Georgia State Law Review databases on Lexis, Westlaw and HeinOnline.[12]

The Georgia General Assembly began in 1777 as a body consisting of the lower House of Assembly to which counties elected two members each members each, and an Executive Council, which included a councillor elected by their respective Assembly delegation. After the enactment of the Georgia Constitution of 1789, the body was changed to a bicameral legislature of a Senate and House of Representatives, both to be directly elected. From 1789-1795, senators were elected every three years, and after the enactment of the May 1795 Constitution, senators were elected annually to one-year terms. Senators were moved to two-terms after December 5, 1843.

Article III Section VI of the Georgia State Constitution specifies the powers given to the Georgia General Assembly.[13] Paragraph I states, "The General Assembly shall have the power to make all laws not inconsistent with this Constitution, and not repugnant to the Constitution of the United States, which it shall deem necessary and proper for the welfare of the state." Moreover, the powers the Constitution gives the Assembly include land use restrictions to protect and preserve the environment and natural resources; the creation, use and disciplining through court martial of a state militia which would be under the command of the Governor of Georgia acting as commander-in-chief (excepting times when the militia is under Federal command); The power to expend public money, to condemn property, and to zone property; The continuity of state and local governments during times of emergency; state participation in tourism. The use, control and regulation of outdoor advertising within the state.

Members of the Georgia General Assembly maintain two important privileges during their time in office. First, no member of either house of the Assembly can be arrested during sessions of the General Assembly or during committee meetings except in cases of treason, felony, or "breach of the peace". Also, members are not liable for anything they might say in either the House or the Senate or in any committee meetings of both.