∆8-THC is moderately less potent than Δ9-THC (being ≈50-66% as potent in-vivo).[5][6] This essentially means that it has properties similar to those of ∆9-THC, although to a lesser degree per milligram of material consumed.[7] ∆8-THC may cause increased heart rate, reddening of the eyes, dizziness, dryness of the mouth and throat, paresthesia, tinnitus, increased body awareness, weakness, muscle tension or tremor, reduced motor coordination, fatigue, sleepiness, changes in visual perception, altered visual imagery, enhancement of colors or contrasts, time distortion, changes in auditory perception, euphoria, tranquility, relaxation, racing thoughts, dreamy introspective states, or difficulty in thinking, speaking, reading, or remembering.[6]

A 1973 study testing the effects of ∆8-THC in dogs and monkeys reported that a single oral dose of 9,000 milligrams per kilogram of body mass (mg/kg) was nonlethal in all dogs and monkeys studied.[8][9] The same study reported that the median lethal dose of ∆8-THC in rats was comparable to that of ∆9-THC.[8] Both isomers of THC have been found to cause a transient increase in blood pressure in rats,[10] though the effects of cannabinoids on the cardiovascular system are complex.[11] Animal studies indicate that ∆8-THC exerts many of its central effects by binding to cannabinoid receptors found in various regions of the brain, including the cerebral cortex, thalamus, basal ganglia, hippocampus, and cerebellum.[12][13]

∆8-THC is a tricyclic terpenoid. Although it has the same chemical formula as ∆9-THC, one of its carbon-carbon double bonds is located in a different position.[5] This difference in structure increases the chemical stability of ∆8-THC relative to ∆9-THC, lengthening shelf life and allowing the compound to resist undergoing oxidation to cannabinol over time.[14] Like other cannabinoids, ∆8-THC is very lipophilic (log P = 7.4[24]). It is an extremely viscous, colorless oil at room temperature.[25]

While ∆8-THC is naturally found in plants of the Cannabis genus,[3] this compound can also be produced in an industrial or laboratory setting by exposing CBD to acids and heat.[26][27][28] Solvents that may be used during this process include methylene chloride, toluene, and hexane.[28] Acids that may be used include tosylic acid, indium(III) triflate, trimethylsilyl trifluoromethanesulfonate, hydrochloric acid, and sulfuric acid.[28][29] Because it is possible for chemical contaminants to be generated during the process of converting CBD to ∆8-THC, such as Δ10-THC, 9-OH-HHC and other side products, as well as the potentially toxic chemical reagents used during manufacture, concern has been raised about the safety of untested or impure ∆8-THC products.[29][30] 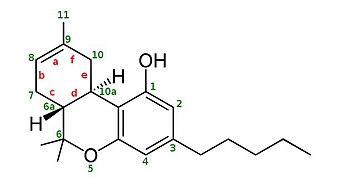 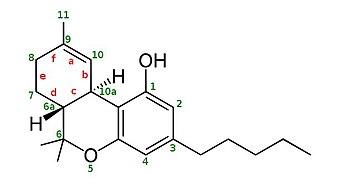 The partial synthesis of ∆8-THC was published in 1941 by Roger Adams and colleagues at the University of Illinois.[36] In 1942, the same research group studied its physiological and psychoactive effects after oral dosing in human volunteers.[37] Total syntheses of ∆8-THC were achieved by 1965.[38] In 1966, the chemical structure of ∆8-THC isolated from cannabis was characterized using modern methods by Richard L. Hively, William A. Mosher, and Friedrich W. Hoffmann at the University of Delaware.[39] A stereospecific synthesis of ∆8-THC from olivetol and verbenol was reported by Raphael Mechoulam and colleagues at the Weizmann Institute of Science in 1967.[40] ∆8-THC was often referred to as "Delta-6-THC" (Δ6-THC) in early scientific literature, but this name is no longer conventional among most authors.[41]

Legality in the United States[edit]

The 2018 United States farm bill signed into law in December 2018 states "that any cannabis containing under 0.3% Delta-9 THC is classified as “hemp” and no longer a controlled substance.",[42] ∆8-THC products partially synthesized from compliant sources (including industrial hemp and derivative cannabidiol extracts) have been sold by a range of digital vendors and a more limited array of brick and mortar retailers, including head shops. Ranging from bulk quantities of unrefined distillate to prepared edibles and atomizer cartridges[43] suffused with cannabis-derived terpenes, they are usually marketed as federally legal alternatives to their ∆9-THC counterparts.[44] However, the legal status of ∆8-THC at the federal level is in question with some believing that the Oct. 2020 DEA IFR addressing "synthetics" applied to Delta-8 and other hemp derivatives allowed by the Farm Bill.[45][46]

Beginning in late 2020, ∆8-THC began to attract the attention of many cannabis consumers throughout the United States. Thought of as an alternative to traditional cannabis use, especially in areas where marijuana is illegal, the news of ∆8-THC spread quickly via news agencies,[46] cannabis publications,[44] blogs, and podcasts which attracted a storm of social media attention.

Because marketing of ∆8-THC products does not require special licensing or, in most states, chemical analysis, the fact that these products can be produced and marketed nationally instead of one state at a time, and have no more tax than an ordinary sales tax, if that, means that they are far cheaper than ∆9-THC products purchased in a cannabis dispensary. They can be sent through the mail; ∆9-THC products, still illegal at the federal level, can not. As of 2021, a sizeable new industry, including franchises, is being or has already been created.

Despite claims of legality by manufacturers, independent testing of products from retail often reveals significant levels of delta 9 THC, well above the legal threshold.[48] One store owner in Menomonee Falls, Wisconsin is facing a sentence of up to 50 years for selling delta 8 products with illegal amounts of delta 9 THC.[49] Other raids and arrests have happened due to delta 9 THC content of these products in North Carolina.[50][51] Catoosa County Sheriff Sisk has announced intent to prosecute stores distributing delta 8 THC with non-compliant delta 9 THC levels, and has stated “the products the sheriffs office has purchased and tested all contain significant levels of Delta 9.” and that they have “evidence needed to move forward with prosecution and seizures."[52]

∆8-THC is typically synthesized from cannabidiol extracted from hemp[58] as the natural quantities of Delta 8 found in hemp are low. The reaction often yields a mixture that contains other cannabinoids and unknown reaction by-products. As a result, most products sold as ∆8-THC are not actually pure ∆8-THC.[58] Little is known about the identity and the health effects of the impurities.[58]

The FDA has reported 104 adverse event reports related to delta 8 THC, including one pediatric case with a coded outcome of "death".[59] National poison control centers received 2,362 exposure cases of delta-8 THC products between January 1, 2021 (i.e., date that delta-8 THC product code was added to database), and February 28, 2022, 58% of these exposures involve adults.[59]

∆8-THC has been studied as a potential treatment for glaucoma,[60][61] corneal injury,[62][63] and chemotherapy-induced nausea and vomiting.[14]

Although ∆8-THC is a minor constituent of medical cannabis, no large clinical studies have been conducted on it alone. However, thus far the pharmacology of the compound has been found to be similar to its isomer delta-9-THC, though with less potency.