The proposal to renew Cannabis party PCLYN as "Ecological Cannabis Party" in Spain 2006, from the people who were in the Cannabis Valencia Party in Spain's March 2004 general election

In the 1970s, J.J. McRoach ran for parliament as candidate for the Australian Marijuana Party.[1] He had an advertising campaign funded by an anonymous dealer. His party came fourth in the elections. In 1986 Nick Brash ran for the "Marijuana Party" for the Kiama NSW by-election against ALP heavy-weight Bob "Bobo" Harrison. Then in 1987 Nick Brash ran in the Heathcote NSW by-election with 13 other candidates including the infamous Rex "Buckets" Jackson. This campaign was partly funded by the late John Marsden, solicitor and outspoken civil libertarian. In the 1988 NSW State Election he joined Macciza Macpherson in running for the Legislative Council Soon after, the electoral laws were changed requiring all political parties to prove a membership of 500 enrolled voters, an impossible task for the Marijuana Party. The independent HEMP Legalise Marijuana party continues to run in the upper house in South Australian state elections, with their best result being in 1997 when they received 1.7% of the vote, beating relatively popular parties such as the SA Greens and the SA branch of the National Party of Australia. Leader of the Australian Greens party Adam Bandt has also endorsed an open-minded attitude to recreational use of cannabis.[2]

The Hemp Party was founded in 1993 and has a constitution, which describes an organisation with the aim of endorsing candidates to contest elections to the Federal Parliament of Australia. The HEMP Party (Help End Marijuana Prohibition) was first registered in 2000, and then de-registered in 2006 under Schedule 3 of the Electoral and Referendum Amendment (Electoral Integrity and Other Measures) Act 2006. During that time candidates stood in state and federal elections. Since that time it has been difficult to prove a membership of 500, as members contacted by the AEC (Australian Electoral Commission) sometimes disavowed membership, or had changed address without notifying the Party or the AEC.[3]

In 2013, the Drug Law Reform Party successfully registered with the Australian Electoral Commission, with over 500 members as required. Although the party represented the liberalisation of drug laws in general, cannabis was a primary focus. The party officially deregistered on 31 July 2017.[5]

The Legalise Cannabis Queensland Party was established in the state of Queensland in September 2020.[6]

In Canada, the Marijuana Party of Canada was launched by Marc-Boris St-Maurice in February 2000. The party is seen as a follow up to the Québécois Bloc pot, in order to work at the federal level. There are also other party organizations at the provincial level. The Liberal Party of Canada adopted a cannabis legalization policy at their recent party convention.

The Saskatchewan Marijuana Party[7] functions in a politically independent fashion, and does not hold any formal association to any other political organizations federally or provincially. On April 20 of 2006, the party submitted their petition of registration to elections Saskatchewan. The petition was successful and the party was fully registered as a political party in the province of Saskatchewan as of 7 June 2006.

The party leader is currently Nathan Holowaty. Holowaty has referred to himself as a socially responsible libertarian and believes in the fullscale legalization of cannabis. Holowaty has a degree in political studies from the University of Saskatchewan.

Political Parties in Folketinget, which is the Danish parliament, who wants to legalize cannabis:

Alternativet are in favor of cannabis legalization. This is the case for both medical and recreational. "This is a great way to take a stand against criminal gangs, decriminalize normal Danes and to secure that there aren't any dangerous chemicals added." - Josephine Fock.

After the incident at Freetown Christiania, where the police destroyed all the stalls, and cleared them of cannabis, the Danish Social Liberal Party have chanced stance on this issue. They now want a three-year trial, where you can buy state regulated cannabis across the country.

Red–Green Alliance wants to legalize cannabis sold and produced by the state. "It will secure that criminals can't make money off the import, nor make money off the illegal sale of cannabis. The money, the state makes off the sale, shall be used on information, treatment for the addicts and welfare benefits, instead of giving the money to the criminals" - Rune Lund.[8]

As of 2015, there have been ongoing attempts for the establishment of the Cannabis Party of Greece, but they haven't resulted in the creation of a registered political party yet.[9] 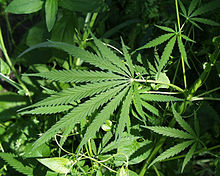 The Green Party of Aotearoa New Zealand has said that if it forms a government in the 2017 election it will legalise cannabis. "Under its proposal, people would be able to legally grow and possess marijuana for personal use". The party would also "urgently amend the law so sick people using medicinal marijuana were not penalised".[10][11]

The former leader of the ACT Party Don Brash has spoken out in favour of decriminalizing cannabis.[12]

The nationally registered political party Iqela Lentsango: The Dagga Party of South Africa is South Africa's first and foremost Cannabis legalization group. This group are also activists and supporters of people arrested, charged and/or imprisoned for the possession of dagga (the South Africa word for Cannabis) and related charges.[13][14]

Dr. Mario Oriani-Ambrosini, a Member of Parliament in South Africa, he was diagnosed with cancer and subsequently began lobbying for the legalization of medical marijuana. He went so far as to address the entire Parliament sitting in Cape Town with an impassioned plea for the Members of Parliament to consider the legalization of medical marijuana. He died shortly after this but thanks to him and other activists, South Africa seems to be heading in the direction of eventually legalizing cannabis for medical use.[15][16]

Cannabis Is Safer Than Alcohol (CISTA) was a political party founded in 2015. In the 2015 General Election they campaigned for a Royal Commission to review the UK's drug laws relating to cannabis. CISTA is for harm reduction.[17] The party was deregistered by the Electoral Commission on 3 November 2016.[18]

As of 2016, the Liberal Democrats, Green Party of England and Wales and Scottish Green Party all support the legalisation of cannabis.[19][20][21]

Active cannabis political parties in the United States include the Grassroots—Legalize Cannabis Party, the Legal Marijuana Now Party, and the U.S. Marijuana Party.

Both the Libertarian Party and the Green Party advocate for the legalization of marijuana.[22]

Other cannabis political parties that were active in the past have included the Anti-prohibition Party, the Grassroots Party, the Marijuana Reform Party, and the Youth International Party.

The Youth International Party, formed in 1967 to advance the counterculture of the 1960s, often ran candidates for public office. The Yippie flag is a five-pointed star superimposed with a cannabis leaf.[23]

In Minnesota: the Grassroots—Legalize Cannabis Party, and the Legal Marijuana Now Party.[34]

In Vermont: the U.S. Marijuana Party[31]