Use of cannabis in South Africa

Cannabis in South Africa has been decriminalised by the country's Constitutional Court for personal consumption by adults in private.[1] However, laws prohibiting use outside of one's private dwelling and buying and selling cannabis still remain.[2] Since regulations against the purchase of products containing cannabis still remain in effect, it also remains unclear how the ruling can be enforced as well.[2]

Before prohibition against the plant was lifted in 2018 advocates pressured the government to modify its laws, which first restricted cannabis in 1922, to allow exemptions for medical use, religious practices, and other purposes. Dagga (Afrikaans pronunciation: [/ˈdaχa/]), is the Afrikaans term commonly referred to for cannabis; it derives from the Khoikhoi word dacha, which was used by the early European colonial settlers in the Western Cape.[3]

Cannabis is thought to have been introduced to Africa by early Arab or Indian traders. [3] It was already in popular use in South Africa by the indigenous[4] Khoisan and Bantu peoples prior to European settlement in the Cape in 1652, and was traditionally used by Basotho to ease childbirth.[5] According to author Hazel Crampton, old Afrikaner recipes for teas and foods exist which make use of the plant.[6] Use of the plant was associated with traditional African populations and a lower economic status.[3][7]

Longitudinal research studies by the Medical Research Council (MRC) report that the number of cannabis users in South Africa was 2.2 million in 2004, and 3.2 million in 2008.[8] In 2003, Interpol rated South Africa as the fourth-largest cannabis producer in the world, and the Institute for Security Studies reported that most cannabis seized in the UK and a third globally had South African origins.[9]

The first written record of the plant in South Africa is by Jan van Riebeeck, who ordered officers of the Voorman to purchase "daccha" in Natal for trade with the Khoikhoi. The Dutch East India Company attempted to establish a monopoly on its sale, and to that end prohibited cultivation of the plant by Cape settlers from 1680. However, the ready availability of cannabis in the wild and through trade with indigenous peoples meant that there was little profit to be made. Consequently, the prohibition was lifted in 1700.[10]

Beginning in 1860, the Natal Colony began to import Indian workers (called "coolies" at the time) to supplement their labour force. These Indians brought with them the habit of consuming cannabis and hashish, which blended with local, extant African traditions. The European authorities were concerned by this practice, believing it sapped the vitality of their workers;[11] consequently, in 1870, Natal's Coolie Law Consolidation prohibited "the smoking, use, or possession by and the sale, barter, or gift to, any Coolies whatsoever, of any portion of the hemp plant (Cannabis sativa)..."[7]

Both the Cape and Transvaal colonies restricted the growth of the plant, which they considered a "noxious weed";[12] in 1891, the Cape Colony prohibited cannabis under Act 34, and the Free State outlawed dealing in cannabis in 1903.[13] In 1908, Natal began to regulate the sale of cannabis.[10] In the Transvaal, dagga was sold "openly and normally" by storekeepers to miners.[12]

Although white farmers did cultivate cannabis in the 18th century and early 19th century, consumption by the farmers themselves was rare. However, even cultivation fell out of favour later in the 19th century.[10] In 1921, "serious signs of a moral panic focusing around dagga" appeared, centred on the Western Cape. A concern developed about the "'camaraderie' which led some to lay aside race and other prejudices with regard to fellow" drug users.[4]

In 1922, regulations were issued under an amended Customs and Excises Duty Act which criminalised the possession and use of "habit forming drugs", including dagga. Under regulation 14, the cultivation, possession, sale, and use of the plant were prohibited. The burden of proof for any defence against a charge lay with the accused; legal scholar Professor Chanock contrasted this with laws regulating alcohol at the time, which laws placed the burden of proof on the accuser; he reasoned that the cannabis regulations were applied differently because they were intended to target black people.[12]

Following the Fifth Session of the League of Nations Advisory Committee on Traffic in Opium and Other Dangerous Drugs, it was at South Africa's wish, expressed by Secretary to the Prime Minister J. C. Van Tyen in 1923,[14] that dagga was included in a list of prohibited narcotics, which list had hitherto been almost entirely concerned with opium and its derivatives.[12] Cannabis was subsequently outlawed internationally in 1925.[10]

People marching in the streets of Cape Town against the prohibition of cannabis in South Africa, 9 May 2015

Cannabis was wholly criminalised in South Africa in 1928 under the Medical, Dental, and Pharmacy Act, for political and moral reasons.[4][15] and in 1937, the government of South Africa introduced the Weeds Act, which made the occupant or owner of a property accountable for preventing the growth of cannabis, or any other plant classified as a "weed", on the property.[10] Concern about the extent of dagga use in South Africa continued to grow, resulting eventually in the enactment, in 1971, of the Abuse of Dependence-producing Substances and Rehabilitation Centres Act.[13] Under the Drugs and Drug Trafficking Act of 1992, people found in possession of more than 115 grams of dagga were presumed to be guilty of dealing. However, following the adoption of the interim constitution of South Africa, courts found that this unjustifiably infringed the constitutionally enshrined presumption of innocence, and consequently invalidated those parts of the Act.[16] 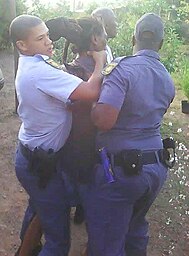 Cannabis grows well in South Africa's climate,[18] especially in the "dagga belt", an area including the Eastern Cape and KwaZulu-Natal provinces[10] where, per the 2011 International Narcotics Control Strategy Report, it is a traditional crop. According to GroundUp, cannabis is "an important cash crop" that "sustains entire communities in the rural Eastern Cape", which otherwise survive in a subsistence economy.[19][20] Rural farmers are typically poor and produce low quality local product that is consumed domestically by the lower class, while middle class growers produce product for the rest of the national and international marijuana market.[20] Most of the national product is consumed domestically or regionally, but increasing amounts are seized in Europe.[21]

In 1996, the Department of Land and Agriculture, the Tobacco and Cotton Research Institute, and the Southern African Hemp Company conducted agricultural research on the viability of farming non-psychoactive hemp strains of the plant in the North West province.[18]

The state conducted cannabis eradication programs since the 1950s. Police initially uprooted dagga plantations and burned the crops but in 1980 switched to using herbicides, which they would dispense with hand-held pumps. By the end of the 1980s, helicopters replaced ground patrols, and helicopter patrols would release herbicides aerially to destroy entire crops in minutes.[19]

In 1990, a coalition of civil society organisations successfully lobbied government in the former Natal province to ban the herbicide paraquat from use in aerial eradication programmes. The South African Police Service (SAPS) now uses a herbicide formulation which includes glyphosate, and maintains that it is safe, posing "no threat to human, animal, or environmental health". However, a new coalition of the non-profit organisations Fields of Green For All and the Amapondo Children’s Project launched legal proceedings in 2016 to stop the SAPS from performing aerial eradications.[19][20] 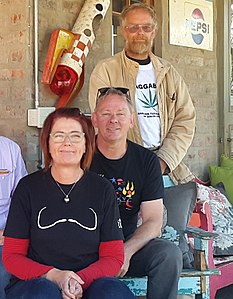 Iqela Lentsango: The Dagga Party of South Africa (more commonly known as the Dagga Party) is a South African political party founded in February 2009 by Jeremy Acton, who remains the party's leader. The Dagga Party was established to allow voters who support the legalisation of dagga to have representation in elections.[22] The party's position is that cannabis users should have the same rights as people who use tobacco and alcohol.[23]

Julian Stobbs and Myrtle Clarke are known as the "Dagga Couple" in South African media.[24] In August 2010, their property was raided and they were arrested on charges of possessing and dealing in dagga. In February 2011, they argued before a magistrate's court that they had a "human right to ingest anything" they chose, provided that it did not harm them, and applied for leave to make their case before the Constitutional Court.[25][26] Their case was struck from the court roll, pending the result of their constitutional challenge of the legality of cannabis prohibition.[27][28] 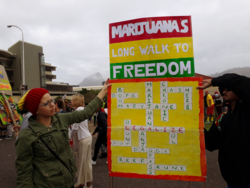 Since 2000, as part of the Global Marijuana March initiative, Cape Town has hosted an annual pro-legalisation Cannabis Walk on the first Saturday of May.[29]

In February 2014, the Inkatha Freedom Party's Dr Mario Oriani-Ambrosini introduced the Medical Innovations Bill, which would legalise cannabis for medical treatment and industrial use. Under the proposed bill, with the patient's informed consent, doctors can administer unproven but harmless cancer treatments such as cannabis if other treatments are not efficacious; informed consent will shield doctors from common law liability and the requirements of their medical profession in such circumstances. Dr Oriani-Ombrosini was diagnosed with lung cancer, and had been on cannabinoid treatment in the last months leading to his death.[35][36][37] Oriani-Ambrosini's bill was rejected by Parliament’s Portfolio Committee on Health in November 2017.[38]

The official position of the CDA is that dagga should be decriminalised, reasoning that criminalisation has been shown to have little effect on the prevalence of drug use, and that decriminalisation could improve public health.[39] However, the CDA does not currently support commercialisation of the plant.[40]

In 2015, the Department of Social Development commissioned the CDA to conduct research into the feasibility of partially legalising dagga. That research is yet to be completed.[41]

The South African regulatory body for drugs, the Medicines Control Council, classifies dagga as a Schedule 7 substance, which means that it has no medicinal value and "is illegal to cultivate, analyse, possess, research, use, sell or supply without authorisation from the Department of Health."[42][43] In 2016, it published regulations providing for the use of dagga for medical reasons, and expressed a desire to reclassify "cannabinoid medication" as a Schedule 6 substance, which would make it available for medicinal use.[44][45] However, the Dagga Couple point out that partial decriminalisation in 2017 has reduced the significance of the proposed change in scheduling, and have called for a more drastic reclassification of the drug.[24]

In January 2016, following a systematic review of scientific studies on cannabis, the Medicine Research Council concluded that there was evidence that cannabinoids could be used to treat chronic pain and spasticity in multiple sclerosis.[40]

On 31 March 2017, in a case brought by Gareth Prince, Jeremy Acton, and Jonathan Rubin before the Western Cape High Court, presiding Judge Dennis Davis ruled that any law disallowing the use and cultivation of cannabis by an adult in a private dwelling was unconstitutional and therefore invalid, on the grounds that such infringement of the constitutional right to privacy could not be justified.[48] However due to appeals from the state, this decision needed to be confirmed by the Constitutional Court before taking effect.[11] The court also ruled that, in the interim, prosecutions related to the transgression of the laws in question should be stayed. The judge further ordered that “it will be deemed to be a defence that the use, possession, purchase or cultivation of cannabis in a private dwelling is for the personal consumption of the adult accused”.[44][49] The Central Drug Authority's chairperson David Bayever encouraged the Department of Social Development to appeal the ruling, citing concerns about the possibility of an increase in road accidents, and the difficulty in limiting children's exposure to the drug.[41][50] After hearing all appeals in the Constitutional Court during the month of November 2017, the panel announced their decision to reserve judgment in the matter until further notice.

After announcing their decision to rule on the matter, the full panel of judges convened on 18 September 2018 at the Constitutional Court in Johannesburg with Chief Justice Raymond Zondo reading out what he described as a unanimous decision. In his ruling it was stated:

He placed no limits on quantities that adults would be allowed to carry, consume or grow and said that it would be up to parliament to decide once a bill was drawn up to accommodate these recommended changes. The government has been given a period of 24 months to implement the landmark ruling's findings.[52]