Use of cannabis in the Republic of Ireland

Cannabis in Ireland is illegal for recreational purposes. Use for medical purposes requires case-by-case approval by the Minister for Health.[1] A bill to legalise medical uses of cannabis passed second reading in Dáil Éireann (lower house) in December 2016.[2]

In the Irish Free State, cannabis and cannabis resin were first prohibited by the Dangerous Drugs Act 1934,[3] which came into force on 1 April 1937.[4] The 1934 act replaced the Dangerous Drugs Act 1920 (a UK act passed before the Free State's creation) and fulfilled the state's obligations under the 1925 revision of the International Opium Convention, which had added Indian hemp to the list of controlled substances, and which was ratified by the Free State in 1931.[5][6]

Cannabis use increased from the late 1960s.[7] In 1968 the government set up a Working Party on Drug Abuse, whose 1971 report recommended keeping "the legal and medical status of cannabis" under review, and that possession of "a small amount of cannabis" for personal use should not be punished by imprisonment.[8] The recommendation to place cannabis in a separate legal category from other narcotics was included in the Misuse of Drugs Act 1977,[7] which replaced the 1934 act,[9] and remains in force.[10][11]

The gardaí (Irish police) have a level of discretion when dealing with recreational cannabis users. To procure a conviction any cannabis seized has to be sent for analysis to the Garda Forensic Science Laboratory. This, along with the time needed to process the arrest, means that individual gardaí may decide not to arrest for small amounts, but the drug will be seized and the name of the individual will be taken. Possession of cannabis is an arrestable offense and in 2003, 53 per cent of all drug seizures and 70 per cent of all drug-related prosecutions were for cannabis. Trafficking or possession with intent to supply are serious offenses under Irish law, punishable by fines of up to €2500 and/or a prison sentence up to a year in length.[12]

On being brought to court, the penalties for possession are outlined as follows:[14]

The 1998 regulations under the Misuse of Drugs Act 1977 (as amended) listed cannabis, cannabis resin, cannabinol and its derivatives as schedule 1 drugs.[15] For such drugs, manufacture, production, preparation, sale, supply, distribution and possession is unlawful for any purpose, except under licence from the Minister for Health.[16] Licences were granted to GW Pharmaceuticals in 2002 and 2003 to allow medical trials of the cannabis extract nabiximols (Sativex) in a county Cork hospice and Waterford Regional Hospital.[17] In 2014, the 1998 regulations were amended to allow nabiximols to be prescribed by excepting it from schedule 1.[18][19][20] The first licence for medical use of cannabis oil was issued in December 2016 to allow Tristan Forde a two-year-old boy with Dravet syndrome to continue treatment begun in Colorado.[1][21] This was issued by the minister after an application by the boy's physician.[1] 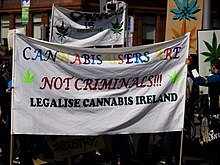 Luke 'Ming' Flanagan, a longstanding pro-cannabis campaigner, was elected to the 31st Dáil in the 2011 general election as an independent Teachta Dála for Roscommon–South Leitrim.[22] On 6 November 2013, he proposed a motion "That Dáil Éireann calls on the Government to introduce legislation to regulate the cultivation, sale and possession of cannabis and cannabis products in Ireland", which was defeated by 111 votes to 8.[23][24] On 20 November 2013, he introduced a private member's bill, the Cannabis Regulation Bill 2013, which never got a second reading.[25][26]

In November 2015, Aodhán Ó Ríordáin, the Minister of State responsible for the National Drugs Strategy, said he favoured decriminalising cannabis, cocaine and heroin for personal use.[27] Ó Ríordáin lost his seat at the 2016 election.

In December 2016, a private member's bill was introduced by Gino Kenny of People Before Profit to make cannabis available in Ireland for medicinal use.[28] It passed second stage without a vote.[2][29] The bill progressed to the amendments stage on 9 November 2017.[30]

In June 2018, after a bill was passed to legalise cannabis in Canada, Taoiseach Leo Varadkar stated that the decriminalisation of cannabis was 'under consideration', with an expert group considering the examining the systems in jurisdictions in which cannabis has been decriminalised for recreational use.[32]

In a 2017 interview with Hot Press magazine, Fianna Fáil TD Stephen Donnelly spoke about smoking cannabis.[33] After being announced as a minister in the 2020 cabinet, Donnelly reportedly stood by his 2017 comments,[34][35] and noted an openness to the liberalisation of some drug laws, stating that if "you're doing something that's not harming anybody else, it's hard to see a legitimate role for the State in prosecuting you for it".[34] A 2020 news article described Donnelly as "broadly supportive" of supervised injection centres.[34]

In a 2020 interview, Green Party health spokesperson, Ossian Smyth said that he raised the proposition of legalising drugs during government negotiations, but added: “Fine Gael and Fianna Fáil said no.”[36]