Skip to content
Referendum on legalization of Cannabis in Alaska
For the Measure of the same name passed in 1990 which criminalized Cannabis use, see Alaska Measure 2 (1990).

Alaska Measure 2 was a successful 2014 ballot measure in the U.S. state of Alaska, described as "An Act to tax and regulate the production, sale, and use of marijuana."[1] The measure went into effect on 24 February 2015, allowing Alaskans age 21 and older to possess up to an ounce of cannabis and six plants, making Alaska the third state to legalize recreational marijuana, following Colorado and Washington.[2] Oregon and Alaska both voted in legalization on Election Day 2014, but Alaska preceded Oregon in enacting their legislation.

The legal status of cannabis in Alaska had varied greatly over the preceding 40 years. Alaska had previously recognized a right to cannabis with the 1975 Ravin v. State case in the Alaska Supreme Court. The state Legislature then decriminalized marijuana in 1982, but a 1990 ballot initiative also entitled Measure 2 recriminalized cannabis until its provisions were struck down in a 2003 Alaska Appeals court case, Noy v. State.[3]

Local KTVA-TV newscaster Charlo Greene garnered national coverage, when on 21 September she publicly quit her job on air, and announced her support for legalization. Greene had been reporting on the Alaska Cannabis Club during the evening's newscast, before abruptly revealing that she was the club's owner:[4]

Now everything you've heard is why I, the actual owner of the Alaska Cannabis Club, will be dedicating all of my energy toward fighting for freedom and fairness, which begins with legalizing marijuana here in Alaska. And as for this job, well, not that I have a choice but, fuck it, I quit. 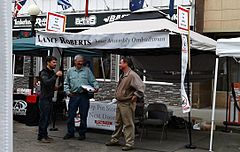 The passage of Measure 2 and subsequent legislation provided municipalities with significant leeway to enact local ordinances pertaining to commercial cannabis production and sales. Lance Roberts, a member of the Fairbanks North Star Borough Assembly, campaigns in downtown Fairbanks in June 2016 for an initiative to prohibit cannabis sales outside of the borough's two incorporated cities, using the slogan "Stop Pot Shops (Stores) Next Door".