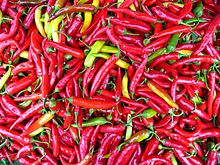 The cayenne pepper is a type of Capsicum annuum. It is usually a moderately hot chili pepper used to flavor dishes. Cayenne peppers are a group of tapering, 10 to 25 cm long, generally skinny, mostly red-colored peppers, often with a curved tip and somewhat rippled skin, which hang from the bush as opposed to growing upright. Most varieties are generally rated at 30,000 to 50,000 Scoville units.[1]

The fruits are generally dried and ground to make the powdered spice of the same name, although cayenne powder may be a blend of different types of peppers, quite often not containing cayenne peppers, and may or may not contain the seeds.[2]

Cayenne is used in cooking spicy dishes either as a powder or in its whole form. It is also used as a herbal supplement.

The word 'cayenne' is thought to be a corruption of the word quiínia[3][4] (also sometimes spelled kyynha[5] or kynnha[3]) of the Old Tupi language once spoken in Brazil, which means pepper (thus 'cayenne pepper' means 'pepper pepper'). It is probable that the place Cayenne in French Guiana was named after the peppers, not vice versa,[6] although it is commonly claimed that the pepper was named after the city. Nicholas Culpeper, for example, uses the word 'cayenne pepper' in 1652,[7][self-published source?] and the city was only renamed as such in 1777.[8] It also is possibly named for the Cayenne River.[1]

Culpeper, in his Complete Herbal from 1653, mentions cayenne pepper as a synonym for what he calls "pepper (guinea)"[note 1][7][9] By the end of the 19th century 'Guinea pepper' had come to mean bird's eye chili or piri-piri,[10] although he refers to Capsicum peppers in general in his entry.[7]

Cayenne powder may be a blend of different types of chili peppers.[2] It is used in its fresh form, or as dried powder on seafood, all types of egg dishes (devilled eggs, omelettes, soufflés), meats and stews, casseroles, cheese dishes, hot sauces, and curries.[2]