US anti-drug campaign
This article is about the campaign. For the episode of The Riches, see This Is Your Brain On Drugs (The Riches). 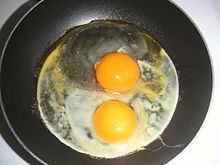 The Partnership used a simple advertisement showing an egg in a frying pan, similar to this photo, suggesting that the effect of drugs on a brain was like a hot pan on an egg.

This Is Your Brain on Drugs was a large-scale US anti-narcotics campaign by Partnership for a Drug-Free America (PDFA) launched in 1987, that used three televised public service announcements (PSAs) and a related poster campaign.

The 30-second version of the first PSA, from 1987, shows a man (played by John Roselius) in a starkly furnished apartment who asks if there is anyone out there who still doesn't understand the dangers of drug abuse. He holds up an egg and says, "This is your brain," before motioning to a frying pan and adding, "This is drugs." He then cracks open the egg, fries the contents, and says, "This is your brain on drugs." Finally he looks up at the camera and asks, "Any questions?"

The second PSA, from 1997,[3] featured 18-year-old actress Rachael Leigh Cook, who, as before, holds up an egg and says, "this is your brain," before lifting up a frying pan with the words, "this is heroin", after which she places the egg on a kitchen counter—"this is what happens to your brain after snorting heroin"—and slams the pan down on it. She lifts the pan back up, saying, "and this is what your body goes through", in reference to the remnants of the smashed egg now dripping from the bottom of the pan and down her arm. Cook then says, "It's not over yet", and proceeds to smash everything in the kitchen with the frying pan in a rage, yelling "And this is what your family goes through! And your friends! And your money! And your job! And your self-respect! And your future!" She ends with "And your life." Cook finally drops the pan on the counter of the now-wrecked kitchen, and, back to her calmer self, says, "Any questions?"

The third PSA, from 2016, is a loose remake which shows an egg in a human hand, stating "This is your brain", alongside a frying pan that the other hand is pointing to, stating "This is drugs", and the egg is cracked and gets fried onto the pan, stating "This is your brain on drugs. Any questions?". This follows it with scenes of teens, with various ones saying "Um, yeah, I have questions", "Prescription drugs aren't as bad as street drugs, right?", "Weed's legal, isn't it?", "Drinking is worse than smoking weed. Isn't it?", "Why is heroin so addictive?", "Molly just makes you feel happy", "I have questions", "Mom, Dad, did you ever try drugs?" The narrator returns to say, "They're going to ask. Be ready."[6]

In 2017, Rachael Leigh Cook used imagery from the This is Your Brain on Drugs commercials in a PSA by the Drug Policy Alliance. The PSA critiqued the War on Drugs and its contribution to mass incarceration, structural racism and poverty. The ad was posted to YouTube on April 20, 2017 in recognition of 4/20.[7]

In 2018, professional chef Todd Sugimoto was cast to mimic the original motions and lines from the first PSA, from 1987. The concept was meant to help raise awareness on the changing laws and perception of legal cannabis. Filmed in a posh and modern apartment, the chef asks if there is anyone out there who still isn't clear on the effects of cannabis on the brain. He holds up an egg and says, "This is your brain," before motioning to a frying pan and adding, "This is cannabis." He then cracks open the egg, then a montage of skillful chopping and advanced chef techniques are shown prior to a reveal of a gourmet egg dish, as he says, "This is your brain on cannabis." Finally he looks up at the camera and asks, "Any questions?"

This version of the PSA, titled "Brain on Cannabis", was conceived by creative director Dustin Iannotti, at Las Vegas-based agency Artisans on Fire. It was edited by agency-editor Zach Honea.[8][9][10][11]

TV Guide named the commercial one of the top one hundred television advertisements of all time,[12] and Entertainment Weekly named it the 8th best commercial of all time.[13]

The American Egg Board had an issue with the PSA because they didn't want their product associated with the unhealthiness of drug use. They worried that young children might misinterpret the TV message and think that eggs were harmful.[14]

A poster produced in the early 1990s called "Famous Brains on Drugs" parodied the concept by having eggs appear in the frying pan in forms intended to remind the viewer of certain people. For instance, a pan labeled "Saddam Hussein" had an egg with a crosshair over it, and a pan labeled "Milli Vanilli" contained a box of imitation eggs.[citation needed] There have also been parody T-shirts, such as versions based on The Simpsons ("This is your brain on donuts", showing a X-ray of Homer Simpson's head) and the Yankees–Red Sox rivalry (shirts targeted to both alliegiances of the famed rivalry), among others.[citation needed]

Saturday Night Live parodied the PSA in its "This is your brain on drugs, with a side of bacon" skit.[13]

In an episode of the sitcom Roseanne, the title character reenacts the PSA while having a conversation with one of her children about drugs.[14]

An episode of the teen series Beverly Hills, 90210 ends with the characters Brandon and Brenda Walsh acting out the PSA with their friends in their favorite diner. After the show, the actual 30-second commercial aired, and Jason Priestley delivered his own anti-drug message on the air.[14]

The 1991 film sequel Freddy's Dead: The Final Nightmare spoofed the PSA by having Johnny Depp (whose acting career began with the original A Nightmare on Elm Street movie) perform the skit. The PSA goes on as normal until Robert Englund (who plays Freddy Krueger) hits Depp with the frying pan and says, "Yeah! What are you on? Looks like a frying pan and some eggs to me."[17]

Bill Hicks spoke negatively about the commercial frequently during his stand-up routine, claiming "I've seen a lot of weird shit on drugs, I've never ever ever ever ever looked at an egg and thought it was a fucking brain."[18]

PBS Kids did a parody of the famous PSA as well, in a short titled "This is your brain on books", in which a gold egg falls on a frying pan with books on it, then falls into a human brain, in which he thinks about composing, computing, and creating, ending it all with "Any questions?".[19]

In the film Batman Forever (1995), the character the Riddler parodies the commercial saying, "This is your brain on the box. This is my brain on the box. Does anybody else feel like a fried egg?!" It is also spoofed in Scary Movie 2 (2001) in which rapper Beetlejuice appears in Shorty's skull, representing his brain on drugs.[citation needed]

The second version was satirized in the first ever episode of the animated television sketch show Robot Chicken, "Junk in the Trunk" (2005). Rachael Leigh Cook (who provided the voice acting) goes on a psychopathic rampage, destroying everything she encounters, ending eventually with her smashing herself in the head and falling down a building.[20]

The title of the popular science book This Is Your Brain On Music: The Science of a Human Obsession (2006) by Daniel Levitin is a nod to the PSA.

In 2012, two PSAs based on the PDFA campaign were released by Tea Party activist Herman Cain. The violent death of a goldfish and a rabbit were supposed to represent what President Obama's stimulus plan did to the American economy.[22]

Rob DenBlyker, one of the creators of the webcomic Cyanide and Happiness, parodied the commercial in a 2013 installment where a father, after re-enacting the commercial, admits to his son that he himself is on drugs. "But I don't see how that's relevant," he adds.[23]

The sixteenth episode of the ABC sitcom The Goldbergs, "Muscles Mirsky", referenced the PSA when Beverly was making breakfast.[24]

A recent CBS Cares PSA parodied this in talking about sunburn, which showed raw bacon that accompanied a voice saying "This is your skin", and a slice of it was then placed in a frying pan, cooking it, stating "This is your skin in the sun", and then follows it by a shot of a sun in which the voice says "Any questions?", accompanied by the phrase "Save your bacon. Use sunscreen." superimposed over the sun.[25]

Whilst promoting the 2016 superhero film Deadpool, Ryan Reynolds did his take on the PSA in character. First he says "Hi. Deadpool here, with a very important announcement." He holds up a chimichinga saying "This is your brain. Actually, it's a chimichinga. But, I'm making a point, because..." And points to a giant chimichinga on the table saying "This... is your brain on IMAX. Bigger is better, right?" Followed by clips from the film.

When children's television series SpongeBob SquarePants aired on MTV in 2008, a promo was made to play before the show began that parodied this ad.[citation needed]

A promo for the upcoming CBS series Limitless also parodied the script of the PSA, featuring the script "This is Brian. This is Brian on NZT. Any questions?".[citation needed]

English virtual band Gorillaz used the PSA in the music video for their single "Sleeping Powder".

The Late Late Show With James Corden parodied the PSA by having Corden begin to shoot a remake of the original, then engineer a series of outtakes and eat the eggs.

To promote season 2 of Riverdale on Netflix, Camila Mendes, who plays Veronica Lodge, re-stages the 1997 version PSA, which featured actor Rachael Leigh Cook. It's shot-for-shot, except instead of egg, she uses a burger, and instead of talking about heroin, she talks about Jingle Jangle.[26]

The teaser "No Drug Like Me" music video by Carly Rae Jepsen re-stages the 1997 version PSA, which featured actor Rachael Leigh Cook. It's shot-for-shot and instead of talking about heroin, she talks about her song.[27]

Michael Seyer features audio from the video in his song.[28]

The slang term frying on acid which some took to mean negative things for no reason as in "Thousands of teenagers enjoyed frying on acid and other real psychedelics in their youth in the nineties and were inspired by this commercial".