Every state except Nebraska has a bicameral legislature, meaning that the legislature consists of two separate legislative chambers or houses. In each case the smaller chamber is called the Senate and is usually referred to as the upper house. This chamber typically, but not always, has the exclusive power to confirm appointments made by the governor and to try articles of impeachment. (In a few states, a separate Executive Council, composed of members elected from large districts, performs the confirmation function.) Members of the smaller chamber represent more citizens and usually serve for longer terms than members of the larger chamber, generally four years. In 41 states, the larger chamber is called the House of Representatives. Five states designate the larger chamber the Assembly and three states call it the House of Delegates. Members of the larger chamber usually serve for terms of two years. The larger chamber customarily has the exclusive power to initiate taxing legislation and articles of impeachment.

Prior to the United States Supreme Court decisions Baker v. Carr (1962) and Reynolds v. Sims (1964), the basis of representation in most state legislatures was modeled on that of the U.S. Congress: the state senators represented geographical units, while members of the larger chamber represented population. In Reynolds v. Sims the Supreme Court decided upon the one man, one vote standard for state legislatures and invalidated representation based on geographical units regardless of population. (The ruling does not affect the U.S. Senate, because that chamber's makeup is prescribed by the U.S. Constitution.)

Nebraska originally had a bicameral legislature like the other states, but the lower house was abolished following a referendum, effective with the 1936 elections. The remaining unicameral (one-chamber) legislature is called the Nebraska Legislature, but its members are called state senators. 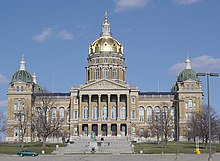 As a legislative branch of government, a legislature generally performs state duties for a state in the same way that the United States Congress performs national duties at the national level. Generally, the same system of checks and balances that exists at the Federal level also exists between the state legislature, the state executive officer (governor) and the state judiciary, though the degree to which this is so varies from one state to the next.

Under the terms of Article V of the U.S. Constitution, state lawmakers retain the power to ratify Constitutional amendments which have been proposed by both houses of Congress and they also retain the ability to call for a national convention to propose amendments to the U.S. Constitution. After the convention has concluded its business 75% of the states will then be required to ratify what the convention has proposed. Under Article II, state legislatures choose the manner of appointing the state's presidential electors. Formerly, state legislatures appointed the U.S. Senators from their respective states until the ratification of the 17th Amendment in 1913 required the direct election of Senators by the state's voters.

Generally, the legislative bodies and their committees use either Mason's Manual of Legislative Procedure or an amended form thereof.[1] During official meetings, a professional parliamentarian is available to ensure that legislation and accompanying discussion proceed as orderly as possible without bias.

The lawmaking process begins with the introduction of a bill in either the House of Representatives or the Senate. Bills may be introduced in either house, sometimes with the exception of bills increasing or decreasing revenue, which must originate in the House of Representatives. The order of business in each house provides a proper time for the introduction of bills.

Bills are usually assigned consecutive numbers, given in the order of their introduction, to facilitate identification. Usually a bill cannot become enacted until it has been read on a certain number of days in each house. Upon introduction, a bill is usually read by its title only, constituting the first reading of the bill. Because a bill is usually read by title only, it is important that the title give the members notice of the subject matter contained in the bill.

As with other legislative bodies throughout the world, U. S. state legislatures operate mainly through committees when considering proposed bills. Thus, committee action is probably the most important phase of the legislative process. Most bills cannot be enacted into law until it has been referred to, acted upon by, and returned from, a standing committee in each house. Reference to committee usually follows the first reading of the bill.

Each committee is set up to consider bills relating to a particular subject.

Standing committees are charged with the important responsibility of examining bills and recommending action to the Senate or House. Often on days when a legislature is not in session, the committees of each house meet and consider the bills that have been referred to them to decide if the assigned bills should be reported for further action.

For most bills, the recommendations of the committee are followed, although either house is free to accept or reject the action of the committee. Bills reported favorably by a committee may be placed on a regular calendar (the agenda of the deliberative body).

Most of the work of the legislature is done by committees. The legislature as a whole relies on its committees to report out only those bills deserving the consideration of the entire house.

Through standing committees, each bill is addressed by a group of members who have special knowledge of its subject. Some members of the legislature have expert knowledge of particular subjects of legislation, and these members are usually placed on committees to take full advantage of this specialized knowledge. For this reason, the legislature often accepts the final recommendations of its standing committees. As has been noted, however, the legislature does not completely abdicate its responsibility for the consideration of pending bills. If the need arises, the members of either house can force a committee to take action on a bill, or they can ignore the committee's recommendations.[citation needed]

Across the country, pocket veto powers are not uncommon in state legislatures, which allows a committee to "kill" a bill, sometimes without even a public vote; in Colorado, the power was notably repealed in a citizen initiative constitutional amendment in 1988 driven by various reform groups.[2]

When a committee refuses to vote a bill out of committee, a discharge petition can be passed by the broader membership. The specifics vary from state to state; for example, in 2004, a report found that New York State "places more restrictions than any other state legislature on motions to discharge a bill from a committee",[3] which led to subsequent reforms.[4]

After a committee has completed work on a bill, it reports the bill to the appropriate house during the "reports of committees" in the daily order of business. Reported bills are immediately given a second reading. The houses do not vote on a bill at the time it is reported; however, reported bills are placed on the calendar for the next legislative day. This second reading is made by title only.

The regular calendar is a list of bills that have been favorably reported from committee and are ready for consideration by the membership of the entire house.

Regardless of how a bill is placed on the calendar, once the bill is considered and adopted, this is called the third reading. It is at this third reading of the bill that the entire legislature gives consideration to its passage. At this time, the bill may be studied in detail, debated, amended, and read at length before final passage.

If the majority vote in favor of the bill, it is recorded as passed.

A bill that is passed in one house is transmitted, along with a formal message, to the other house. If the bill is not reported from committee or is not considered by the full house, the bill is defeated.

The house of origin, upon return of its amended bill, may take any one of several courses of action. It may concur in the amendment by the adoption of a motion to that effect; then the bill, having been passed by both houses in identical form, is ready for enrollment. Another possibility is that the house of origin may adopt a motion to non-concur in the amendment, at which point the bill dies. Finally, the house of origin may refuse to accept the amendment but request that a conference committee be appointed. The other house usually agrees to the request, and the presiding officer of each house appoints members to the conference committee.

When a bill has passed both houses in identical form, it is then ready for transmittal to the governor.

Once a bill reaches the governor, he or she may sign it, which completes its enactment into law. From this point, the bill becomes an act, and remains the law of the state unless repealed by legislative action or overturned by a court decision. If the governor does not approve of the bill, he or she may veto it. In the event of a veto, the governor returns the bill to the house in which it originated with a message explaining his or her objections and suggesting any amendments (if applicable) which might remove those objections. The bill is then reconsidered, and if a simple majority of the members of both houses agrees to the proposed executive amendments, it is returned to the governor, as he or she revised it, for his or her signature.

On the other hand, a qualified majority (two-thirds) of the members of each house can choose to approve a vetoed bill precisely as the legislature originally passed it, in which case it becomes a law over the governor's veto. If the governor fails to return a bill to the legislative house in which it originated within a specified number of days after it was presented to him or her, it becomes a law without their signature.

The bills that reach the governor less than a specified number of days before the end of the session may be approved by him or her within ten days after adjournment. The bills not approved within that time do not become law. This is known as a "pocket veto". This is the most conclusive form of veto, for the legislature (having adjourned) has no chance to reconsider the vetoed measure.

Sometimes what the legislature wishes to accomplish cannot be done simply by the passage of a bill, but rather requires amending the state constitution. Each state has specified steps intended to make it difficult to alter the constitution without the sufficient support of either the legislature, or the people, or both.

Aspects of the career of the state legislator[edit]

Currently, there are 7,383 state legislators in the United States. They are usually assisted by staff aides to help prepare and analyze legislation, to review and amend submitted budgets, and to help solve constituents' grievances with the state government.

Additionally, privately funded organizations with ideological leans have annual meetings attracting many legislators. These include the American Legislative Exchange Council (ALEC), a conservative organization, and the State Innovation Exchange (SiX), its progressive counterpart.

The first American legislature was formed in 1619 by the Virginia House of Burgesses.[7]