Not to be confused with Pioneer (locomotive).

The Pioneer was an Amtrak passenger train that ran between Seattle and Chicago via Portland, Boise, Salt Lake City, and Denver. 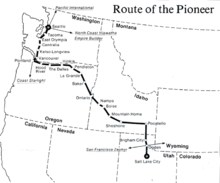 The Pioneer at The Dalles in August 1977

In the 1960s, prior to the creation of Amtrak, two Union Pacific Railroad streamliners provided service to Portland via Boise: the City of Portland (from Chicago) and the Portland Rose (from Kansas City). Amtrak did not retain either train in 1971 – preferring the Empire Builder for Chicago–Pacific Northwest service – with the result that train travel between the Pacific Northwest and Denver required either going west to California or east to Chicago.

Amtrak sought to fill this gap in 1977 with the introduction of the Pioneer between Seattle and Salt Lake City.[1][2] The all-coach train operated on a daily 24-hour schedule with connections available in Ogden, Utah with the Chicago–San Francisco San Francisco Zephyr. Meal service was provided in an on-board cafe, one of the then-new Amfleet dinettes. Coaches were reserved except between Portland and Seattle, where the Pioneer supplemented existing corridor service. In early 1977, Amtrak authorized approximately $500,000 to improve 13 stations along the route in Utah, Idaho, and Oregon. Work included installation of passenger shelters, platforms and rehabilitation of existing stations.[3] Regular service began on June 7.[4][5]

The arrivals and departures board inside Portland Union Station in 1981, listing the Pioneer, among other trains

The Pioneer began exchanging a Seattle–Chicago through coach with the San Francisco Zephyr on April 26, 1981; this was supplemented by a through sleeping car on October 31, 1982. When the Denver and Rio Grande Western Railroad decided to join Amtrak in 1983, Amtrak renamed the San Francisco Zephyr to California Zephyr, shifted it south to the Moffat Tunnel Route, and changed its interchange point with the Pioneer from Ogden to Salt Lake City, the Pioneer's terminus.[6]:143–144

On June 17, 1991, the Pioneer's terminus and California Zephyr interchange point was moved from Salt Lake City to Denver, its route was changed to use the Union Pacific's Overland Route in Wyoming (which had last seen service in 1983), and a bus was added between Salt Lake City and the Pioneer at Ogden. This change was made for two reasons:

In January 1997, Amtrak announced that the Pioneer would end May 10, 1997, when a Congressionally-funded mandate to keep it operating expired. States affected were given until March 15 to submit funding proposals to keep the train operating.[7] While visiting Pendleton, Oregon on February 22, Amtrak President Thomas M. Downs said the Pioneer could be converted to a coach-only Chicago–Portland mail-and-express train operating on an all-Union Pacific routing through Iowa and Wyoming (but missing Ogden) if interested states could provide about $4.8 million to fund the existing operation through that October when the new train could start.[8]

By the March 15 deadline, state funding had not been secured even though the requested funding package had been reduced. Instead of seeking $4.8 million, Amtrak asked the Oregon legislature for $2.9 million in loan guarantees, which would have resulted in triweekly service between Portland and Salt Lake City through the October startup of a daily mixed train carrying express freight and passengers between Chicago and Portland via Omaha, Cheyenne, and Ogden. Oregon refused to provide the loan guarantees because it found Amtrak's collateral (ex-Santa Fe Hi-Level cars) unacceptable.[9] On April 10, Union Pacific told Amtrak that the proposed express train would require $56 million in capital improvements.[10] On May 10, 1997, the Pioneer made its last run, as did the Desert Wind.[11][12] It was reported in the December 1998 issue of Trains that a Chicago–Portland replacement for the Pioneer via Omaha and Cheyenne had been postponed.[13]

The end of the Pioneer severed Wyoming from the national rail network, and also spelled the end of intercity rail service in the more populated portions of Idaho. To maintain service levels in the Seattle–Portland corridor, Amtrak instituted an additional corridor train between the two cities.

Superliner cars on the Pioneer in 1997

The original all-coach Pioneer had Amfleet coaches and a lounge. Amtrak added a Heritage Fleet sleeping car in 1978. With the start of through service with the San Francisco Zephyr in 1981 the Pioneer received bi-level Superliner coaches, but the single-level sleeping car and lounge remained until 1982, when the train went all-Superliner.[6]:155

In accordance with the Passenger Rail Improvement Act of 2008 Amtrak evaluated the possibility of restoring service to the Pioneer and other discontinued long-distance routes. Amtrak considered four options for a restored Pioneer, all of which would have through service to Chicago via the California Zephyr:[14]