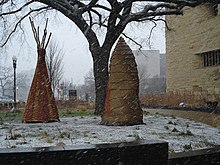 Nora Naranjo Morse (born 1953) is a Native American potter and poet. She currently resides in Espanola, New Mexico just north of Santa Fe and is a member of the Santa Clara Pueblo. Her work can be found in several museum collections including the Heard Museum in Phoenix, Arizona, the Minneapolis Institute of Art in Minnesota, and the National Museum of the American Indian in Washington, DC, where her hand-built sculpture piece, Always Becoming, was selected from more than 55 entries submitted by Native artists as the winner of an outdoor sculpture competition held in 2005.[1][2] In 2014, she was honored with a NACF Artist Fellowship for Visual Arts[3] and was selected to prepare temporal public art for the 5x5 Project by curator Lance Fung.[4]

Nora Naranjo Morse was born in 1953 in Santa Clara Pueblo, in Northern New Mexico[5]. She is the daughter of potter Rose Naranjo,[6] and a member of the Santa Clare Pueblo Tribe. Morse graduated from Taos High School in Taos, New Mexico in 1971 and received a bachelor's degree in university studies from Sante Fe College in 1980.[7] She received an honorary Doctorate from Skidmore College in 2007[5].

Morse's earlier sculpting work was made using clay. Inspired by the ancient traditions of making Pueblo Clowns, she created her own character named "Pearlene". She wrote adventures about this character in "Mud Women", a book of her own poetry. In her later work, Morse commented on Indian Stereotypes as well as raising questions within her own community. Some of her most well-known installations include Sugared Up: A Waffle Garden (1999); I've Been Bingo-ed by My Baby!: A story of love lust, and loss on the rez... (2009); and A Pueblo Woman's Clothesline (1995).[7]

"There is no word for art in the Tewa language ... There is though the concept for an artful life, filled with inspiration and fueled by labor and thoughtful approach."[8]