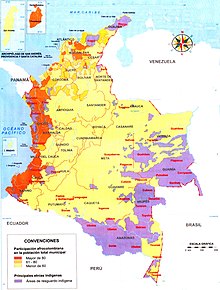 The 1991 National Constitution of Colombia defined Territorial Entities (Entidades Territoriales) as departments, districts, municipalities and indigenous territories. Within an Indigenous Territory Entity (ETI) the people have autonomy in managing their interests, and within the limits of the constitution have the right to manage resources and define taxes required to perform their duties. ETIs are to be defined by the government in conformance with the Organic Law on Land Management. However, this law has yet to be sanctioned so in practice the territories are unregulated.[2]

Some areas claimed by the indigenous people of the Amazon are used for mining and hydrocarbon operations. There is some overlap between protected areas administered under the National Parks System and the indigenous territories.[3] Pressures on the indigenous peoples include depletion of the land, particularly in the Andes, and forced displacement due to the struggle with illegal armed groups.[4] Gold mining and spraying of illegal crops causes pollution of the rivers, and in some areas the rivers are polluted by garbage. Oil extraction and dam construction also cause environmental problems in the reserves.[5]