This article is about the self-governing native areas in the United States of America. For the unorganized U.S. territory whose general borders were initially set by the Indian Intercourse Act of 1834, see Indian Territory. For other uses, see Indian country (disambiguation). 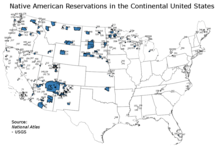 BIA map of Indian Reservations in the Continental United States

Indian country is any of the many self-governing Native American communities throughout the United States. As a legal category, it includes "all land within the limits of any Indian reservation", "all dependent Indian communities within the borders of the United States", and "all Indian allotments, the Indian titles to which have not been extinguished."[1][2] This legal classification defines American Indian tribal and individual land holdings as part of a reservation, an allotment, or a public domain allotment. All federal trust lands held for Native American tribes is Indian country. Federal, state, and local governments use this category in their legal processes. Today, however, according to the U.S. Census of 2010, over 78% of all Native Americans live off reservations. Indian country now spans thousands of rural areas, towns and cities where Indian people live.

This convention is followed generally in colloquial speech and is reflected in publications such as the Native American newspaper Indian Country Today.

Historically, Indian country was considered the areas, regions, territories or countries beyond the frontier of settlement that were inhabited primarily by Native Americans. The first grants of land in what is now the United States made by the King of England left it to the grantee to make such arrangements as they were able with the Indians living on the granted land.

Between the Appalachians and Mississippi[edit]

As the original 13 colonies grew and treaties were made, the de facto boundary between settled territory and Indian country during the 18th century was roughly the crest of the Appalachian Mountains, a boundary set into law by the Royal Proclamation of 1763, the Confederation Congress Proclamation of 1783, and later by the Nonintercourse Act.[3] The Indian Reserve was gradually settled by European Americans and divided into territories and states, starting with Kentucky County (an extension of Virginia) and the Northwest Territory.

Most (but not all) Indians in the area of the former Reserve were either killed or relocated further west under policies of Indian Removal. After the Louisiana Purchase, the Indian Intercourse Act of 1834 created the Indian Territory west of the Mississippi River as a destination. It too was gradually divided into territories and states for European American settlement, leaving only modern Indian Reservations inside the boundaries of U.S. states.