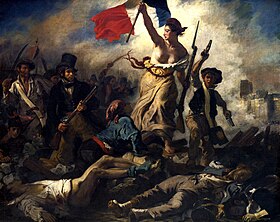 A homeland (rel.[clarification needed] country of origin and native land) is the concept of the place where a cultural, national, or racial identity had formed (usually refers to the ethnic groups involved). The definition can also mean the country of nationality, the place in which somebody grew up or lived for a long enough period that shaped his or her cultural identity, the place in which one's ancestors live for generations, or the place that one regard it as home. [1] When used as a proper noun, the Homeland, as well as its equivalents in other languages, often have ethnic nationalist connotations. A homeland may also be referred to as a fatherland, a motherland, or a mother country, depending on the culture and language of the nationality in question.

In the modern context, one's homeland may not be unique. For example, somebody's ancestors might live in France for generations until his grandfather moved to Germany, where his father and he himself grew up. But he later lived in the US for decades and chose to become American by naturalisation. In this case, he would describe all three countries as his homelands. 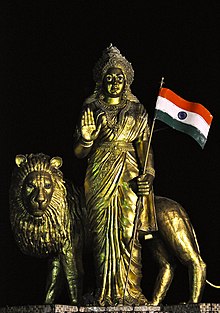 Motherland refers to a mother country, i.e. the place in which somebody grew up or had lived for a long enough period that somebody has formed his or her own cultural identity, the place that one's ancestors lived for generations, or the place that somebody regards as home, or a Metropole in contrast to its colonies. People often refer to Mother Russia as a personification of the Russian nation. Within the British Empire, many natives in the colonies came to think of Britain as the mother country of one, large nation. India is often personified as Bharat Mata (Mother India). The French commonly refer to France as "la mère patrie";[2] Hispanic Americans and 19th century-upper-class Filipinos, commonly referred to Spain as "la Madre Patria". Romans and the subjects of Rome saw Italy as the motherland (patria or terrarum parens) of the Roman Empire, in contrast to Roman provinces.[3][4]

For other uses, see Fatherland (disambiguation). 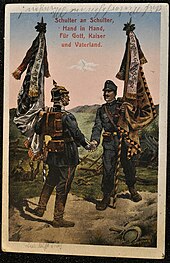 Postcard of an Austrian and a German soldier in the First World War with the text "Shoulder to shoulder, hand in hand, for God, Emperor and Fatherland!"

It can be viewed as a nationalist concept, in so far as it is evocative of emotions related to family ties and links them to national identity and patriotism. It can be compared to motherland and homeland, and some languages will use more than one of these terms.[6] The national anthem of the Netherlands between 1815 and 1932, "Wien Neêrlands Bloed", makes extensive use of the parallel Dutch word, as does the current Dutch national anthem, Het Wilhelmus.

The Ancient Greek patris, fatherland, led to patrios, of our fathers and thence to the Latin patriota and Old French patriote, meaning compatriot; from these the English word patriotism is derived. The related Ancient Roman word Patria led to similar forms in modern Romance languages.

"Fatherland" was first encountered by the vast majority of citizens in countries that did not themselves use it[which?] during World War II, when it was featured in news reports associated with Nazi Germany.[7][8] German government propaganda used its appeal to nationalism when making references to Germany and the state.[7][8] It was used in Mein Kampf,[9] and on a sign in a German concentration camp, also signed, Adolf Hitler.[10]

The term fatherland (Vaterland) is used throughout German-speaking Europe, as well as in Dutch. National history is usually called vaderlandse geschiedenis in Dutch. Another use of the Dutch word is well known from the national anthem, Het Wilhelmus.

In German, the word became more prominent in the 19th century. It appears in numerous patriotic songs and poems, such as Hoffmann's song Lied der Deutschen which became the national anthem in 1922. Because of the use of Vaterland in Nazi-German war propaganda, the term "Fatherland" in English has become associated with domestic British and American anti-Nazi propaganda during World War II. This is not the case in Germany itself, where the word remains used in the usual patriotic contexts.

A corresponding term is often used in Slavic languages, in:

Groups with languages that refer to their native country as a "fatherland" include:

In Romance languages, a common way to refer to one's home country is Patria/Pátria/Patrie which has the same connotation as Fatherland, that is, the nation of our parents/fathers (From the Latin, Pater, father). As patria has feminine gender, it is usually used in expressions related to one's mother, as in Italian la Madrepatria, Spanish la Madre Patria or Portuguese a Pátria Mãe (Mother Fatherland). Examples include: