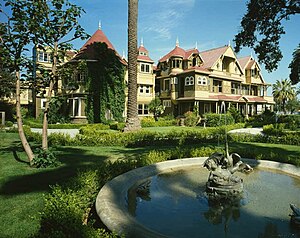 The Winchester Mystery House is reported to be haunted.

Morgan House is a colonial era mansion in Kalimpong considered to be one of the most haunted locations in India.

The house featured by the movie The Amityville Horror and made famous by demonologists Ed and Loraine Warren, built circa 1924. By the time this photograph was taken, the address had been changed to discourage ghost hunters.

In ghostlore, a haunted house or ghost house is a house or other building often perceived as being inhabited by disembodied spirits of the deceased who may have been former residents or were familiar with the property. Parapsychologists attribute haunting to the spirits of the dead and the effect of violent or tragic events in the building's past such as murder, accidental death, or suicide.[1] More scientific explanations for the perception that a house is haunted include misinterpreting noises naturally present in structures, waking dreams, suggestibility, and the effect of toxic substances in environments that can cause hallucinations.

According to science writer Terence Hines, cold spots, creaking sounds, and odd noises are typically present in any home, especially older ones, and "such noises can easily be mistaken for the sound of footsteps by those inclined to imagine the presence of a deceased tenant in their home."[4]

David Turner, a retired chemist, suggested that ball lightning could cause inanimate objects to move erratically.[5]

Skeptical investigator Joe Nickell writes that in most cases he investigated, he found plausible explanations for haunting phenomena, such as physical illusions, waking dreams, and the effects of memory. According to Nickell, the power of suggestion along with confirmation bias plays a large role in perceived hauntings. He states that as a house, inn, or other place becomes thought of as haunted, more and more ghostly encounters are reported and that when people are given to expect paranormal events, they tend to notice those conditions that would confirm their expectations.[6]

Toxicologist Albert Donnay believes that chronic exposure to substances such as carbon monoxide, pesticide, and formaldehyde can lead to hallucinations of the type associated with haunted houses. Donnay speculates on the connection between the prevalence of gas lamps during the Victorian era and start of the 20th century stories of ghost sightings and hauntings, describing it as the "Haunted House Syndrome".[7] Donnay says that carbon monoxide poisoning has been linked to haunted houses since at least the 1920s, citing a 1921 journal article published about a family who suffered headaches, auditory hallucinations, fatigue, melancholy, and other symptoms associated with haunted houses.[8]

Michael Persinger, Jason Braithewaite, and others, suggested that perceived apparitions, cold spots, and ghostly touches are perceptual anomalies caused by variations in naturally occurring or man-made magnetic fields.[9][10] However, a study by psychologist Chris French and others that attempted to replicate Persinger's findings found no link.[11][12]

Psychology Professor Frank McAndrew (Francis T. McAndrew) explains what environmental psychologists call "legibility - the ease with which a place can be recognized, organized into a pattern and recalled" and how a typical haunted house may have a confusing layout and be quite the opposite of legibility.[13]

Ben Radford of CSICOP performed an investigation in 2003 on an allegedly haunted house in Buffalo, New York. The owner of the home, called Tom in the article (real names not used), alleged that he felt tapping on his foot at night. As described by Tom, “I get a tapping on my feet, not a repetitive tap, a trying-to-wake-you-up tap… After the tapping, if I don’t pay attention to it, then I feel a kick.” Radford suggests the tapping was likely a case of “hypnagogic hallucination (a sensory illusion that occurs in the transition to sleep), a fairly common phenomenon that can easily lead to misperceptions.” His wife, called Monica (real names not used), also claimed to feel tapping similar to Tom. According to Radford, “that can be explained by suggestion and what psychologists term folie a deux, when one person (often a spouse) takes on the symptoms of another.” Tom also describes that “ it will kick the bed—it will hit the side of the bed. I feel my whole body move.… Then if I go back to sleep, I start to get a sound sleep, that’s when it kicks again.” Radford suggests his was likely due to restless leg syndrome in which a leg jerk in the middle of the night caused the bed to shake. Radford suggests that the owner’s diagnosis of “sleep apnea is even further evidence for this explanation; restless legs (Restless Leg Syndrome) is actually one of the most common symptoms of apnea.”[14]

The concept of the haunted house was capitalized on as early as 1915 with the Orton and Spooner Haunted House, which now resides at the Hollycombe Steam Collection in England[15]. In 1968 the Farmington (Michigan) Jaycee Auxiliary haunted a house on Grand River Ave in Farmington, MI[16] and by the 1970s, commercial haunted houses had sprung up all over the United States in cities like Louisville, Kentucky and Cincinnati, Ohio.[17] By 2005, an estimated 3,500 to 5,000 professional haunted attractions operated in the United States.[18] In addition, around the time of Hallowtide, many Christian churches run a type of haunted house known as a hell house, which while being a haunted house, also promotes their interpretation of the Christian gospel message. According to USA Today, in hell houses, "participants walk through several 'scenes' depicting the consequences of things like abortion, homosexuality and drunkenness."[19]In Japan, there is a tradition of making obake yashiki (ghost houses) in the summer time as fear is believed to ward off the heat by “giving you the chills”. These typically feature frightening creatures from Japanese folklore, ghosts, demons, sinister crucifixes and other things that are brought to life thanks to decorations, sound effects and animatronics. Often, the obake yashiki will have a story that is told to visitors before they receive a mission that they must accomplish while in the house.

In the case Stambovsky v. Ackley, the Supreme Court of New York, Appellate Division ruled in 1991 that a seller must disclose that a house has a reputation for being haunted when there is a fiduciary relationship or in cases of fraud or misrepresentation,[20] because such a reputation impairs the value of the house:

In the case at bar, defendant seller deliberately fostered the public belief that her home was possessed. Having undertaken to inform the public at large, to whom she has no legal relationship, about the supernatural occurrences on her property, she may be said to owe no less a duty to her contract vendee.[21]

Legends about haunted houses have long appeared in literature. The earliest surviving report of a haunted house comes from a letter written by Pliny the Younger (61 – c. 112) to his patron Lucias Sura, in which he describes a haunted villa in Athens.[22] Nobody would live in the house until the philosopher Athenodorus (c.74 BCE – 7 CE) arrived in the city. He was tempted by the low rent and undeterred by the house's reputation so he moved in. The ghost, an old man bound with chains, appeared to Athenodrus during the first night, and beckoned to the philosopher. The apparition vanished once it reached the courtyard, and Athenodrus carefully marked the spot. The following morning he requested the magistrate to have the spot dug up, where the skeleton of an old man bound with chains was discovered. The ghost never appeared again after the skeleton was given a proper burial.[23]

Stories of haunted houses are also included in the Arabian Nights, as in the tale of "Ali the Cairene and the Haunted House in Baghdad";[24] more modern authors from Henry James to Stephen King have also featured them in their writings.

Haunting is used as a plot device in gothic or horror fiction or, more lately, paranormal fiction; haunted castles and mansions are common in gothic literature. Notable works of fiction featuring haunted houses include: