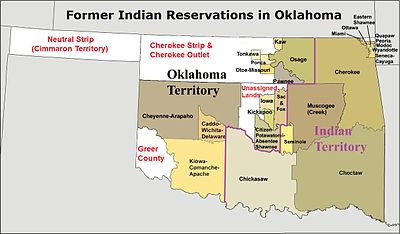 "Former Indian Reservations in Oklahoma" as originally defined by IRS Notice 98-45 issued in 1998, based on suzerain Indian territories that existed before Oklahoma statehood

Both Oklahoma Territory and Indian Territory contained suzerain Indian nations that had legally established boundaries. The US Federal government broke up collective tribal landholdings through the allotment process before the establishment of Oklahoma as a state in 1907. Tribal jurisdictional areas replaced the tribal governments,[1] with the exception of the Osage Nation. As confirmed by the Osage Nation Reaffirmation Act of 2004, the Osage Nation retains mineral rights to their reservation,[2] the so-called "Underground Reservation".

The United States Census has collected data on the former reservations since 1990. These Oklahoma Tribal Statistical Areas are based on pre-statehood boundaries and may extend beyond the state border.

In 2017, the United States Court of Appeals for the Tenth Circuit ruled that the Muscogee (Creek) Nation reservation was never abolished by federal law.[3][4][5] (See: Carpenter v. Murphy.)

In 2020, the United States Supreme Court ruled in McGirt v. Oklahoma that the land reserved for the Muscogee (Creek) Nation since the 19th century remains Indian country for the purposes of the Major Crimes Act.

In preparation for Oklahoma's admission to the union on an "equal footing with the original states"[6] by 1907, through a series of acts, including the Oklahoma Organic Act and the Oklahoma Enabling Act, Congress attempted to unilaterally dissolve all sovereign tribal governments within the state of Oklahoma. The 10th U.S. Circuit Court of Appeals held in 2017 that at least one tribe, the modern Muscogee (Creek) Nation, was never actually dissolved. Congress also transferred all tribal lands by land patent (or first-title deed) to either individual tribal members, sold to non-tribal members on a first-come basis (typically by land run), or was held in trust by the Federal government for the benefit of the members of the tribes.

Congress tried to further rectify the situation through the Omnibus Budget Reconciliation Act of 1993, which authorized substantial tax incentives based on certain business activity within Indian reservations. Congress wanted to insure these benefits would also be available in Oklahoma by including in the legal definition of Indian reservation the term former Indian reservations in Oklahoma. In a 1997 amendment, these lands were defined as those lands as the "then-current jurisdictional areas" of Oklahoma Indian tribes, as determined by the Secretary of the Interior.[7]

In 1998 the IRS issued Notice 98-45 which established the boundaries of the Former Indian Reservations in Oklahoma. For tax purposes, current and former lands owned by Indian tribes are treated as if they are an Indian reservation, regardless of current ownership. Approximately 2/3 of the State of Oklahoma is treated as if it were an Indian reservation for tax purposes.[8] In 2010, the IRS issued Memorandum AM2010-33 which addressed a tribe in Oklahoma issuing Tribal Economic Development Bonds.[9]

These accelerated depreciation schedules have been scheduled to expire, and have been reauthorized several times since their implementation.[10]

A HUBZone is a Small Business Administration program that provides incentives for companies to locate and employ people in Historically Underutilized Business Zones. In addition to income criteria, any lands within the external boundaries of a Federally Recognized Indian Reservation, or a former Indian reservation in Oklahoma is included. Government agencies are required to spend at least 3% of their budgets with prime contractors located in HUBZones.

The Department of Defense (DoD) Indian Incentive Program, part of the Office of Small Business, provides a 5% rebate to a prime contractor, based on the total amount subcontracted to an Indian-Owned Economic Enterprise or Indian Organization [11] To qualify, the organization must be at least 51% owned by an entity (or tribal member) of a federally recognized tribe.[12]