The decentralized administrations (Greek: αποκεντρωμένες διοικήσεις, apokentroménes dioikíseis) are the third level of administrative divisions in Greece. They were created in January 2011 as part of a far-reaching reform of the country's administrative structure, the Kallikratis reform (Law 3852/2010).[1]

They enjoy both administrative and financial autonomy[2] and exercise devolved state powers in urban planning, environmental and energy policy, forestry, migration and citizenship.[3] Beyond that, they are tasked with supervising the first and second-level self-governing bodies: the municipalities and regions.

They are run by a government-appointed general secretary, assisted by an advisory council drawn from the regional governors and the representatives of the municipalities. 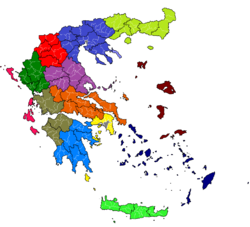