A core-based statistical area (CBSA) is a U.S. geographic area defined by the Office of Management and Budget (OMB) that consists of one or more counties (or equivalents) anchored by an urban center of at least 10,000 people plus adjacent counties that are socioeconomically tied to the urban center by commuting. Areas defined on the basis of these standards applied to Census 2000 data were announced by OMB in June 2003. These standards are used to replace the definitions of metropolitan areas that were defined in 1990. The OMB released new standards based on the 2010 Census on July 15, 2015.[1][2][3] 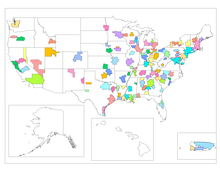 By a similar token, there are now definitions for combined statistical areas (CSAs). These areas can be formed when adjoining CBSAs meet particular standards to become new areas. It does not matter which kind of areas they are; any combination of metro and micro areas may be used to form a CSA. 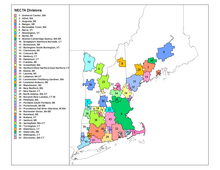 Unlike in past years, the metropolitan areas in New England are currently county-based, consistent with those in the rest of the U.S. Previously, these were referred to by the Census as NECMAs (New England county metropolitan areas) and were separate from the normal census counts for the areas, which used cities and towns as their basis. They have essentially swapped places now, with the city and town areas (or NECTAs, for New England city and town areas) being the separate listings.