The Anglo–Powhatan Wars were three wars fought between settlers of the Virginia Colony and Algonquin Indians of the Powhatan Confederacy in the early seventeenth century. The first war started in 1610 and ended in a peace settlement in 1614.[1] The second war lasted from 1622 to 1626. The third war lasted from 1644 until 1646 and ended when Opechancanough was captured and killed. That war resulted in a defined boundary between the Indians and colonial lands that could only be crossed for official business with a special pass. This situation lasted until 1677 and the Treaty of Middle Plantation which established Indian reservations following Bacon's Rebellion.

The settlement at Jamestown, Virginia (May 1607) was within the territory of the powerful Chief Wahunsunacawh, known to the colonists as Chief Powhatan.[2] The area was quite swampy and ill-suited to farming, and Powhatan wanted Captain John Smith and the colonists to forsake the swamp and live in one of his satellite towns called Capahosick where they would make metal tools for him in exchange for full provision.[3]

Smith underestimated the power of the Virginia Indians and what they were capable of, as they knew the land much better than the colonists. He was reconnoitering the countryside near Powhatan's capital of Orapax in December 1607, only seven months after building the fort on Jamestown Island, when a communal hunting party led by Opechancanough captured him.[4] Smith was released in time for New Year's 1608 when he promised to move the colony to Capahosick. He had convinced Powhatan that he was the son of Captain Newport, and that Newport was their head weroance (tribal chief).

By spring 1609, the local Paspahegh tribe had resumed raiding the fort at Jamestown. However, their weroance Wowinchopunk declared an uneasy truce after he was captured and escaped. Smith had become president of the colony the preceding fall, and he attempted to establish new forts in the territory that summer. He sent a party with Captain John Martin to settle in Nansemond territory. They abandoned the position after 17 men disobeyed orders and were wiped out while trying to buy corn at the Kecoughtan village in Hampton, Virginia. Smith also sent 120 men with Francis West to build a fort upriver at the falls of the James, right above the main town of Powhatan and the site of Richmond, Virginia. He purchased the site from Powhatan's son Parahunt, but this ended up faring no better.

Smith was then injured in an accidental gunpowder explosion and sailed to England on October 4, 1609, and the colony began to starve. Soon afterward, the settlers established Fort Algernon at Old Point Comfort, right beside the Kecoughtan village. In November, Powhatan ambushed and killed Captain John Ratcliffe, who had gone to Orapax to buy corn, and the colonists began to starve to death. Thomas Gates arrived in late May 1610 and decided to evacuate Jamestown. However, on their second day of sailing, they met Francis West's older brother Thomas coming into the Bay with the remnant of his fleet, which had left England one year earlier but been scattered in a hurricane. They therefore returned to the fort under West's command.

West proved far harsher and more belligerent toward the Indians than any of his predecessors, and his solution was simply to engage in wars of conquest against them, first sending Gates to drive off the Kecoughtans from their village on July 9, then giving Chief Powhatan the ultimatum of either returning all colonists and their property or facing war. Powhatan responded by insisting that the colonists either stay in their fort or leave Virginia. West had the hand of a Paspahegh captive cut off and sent him to the Powhatan with another ultimatum: Return all colonists and their property or the neighboring villages would be burned. Powhatan did not respond.

The First Anglo–Powhatan War lasted from 1610 to 1614 between the Powhatans and the colonists.[5] Thomas West sent George Percy with 70 men to attack the Paspahegh capital on August 9, 1610, burning the houses and cutting down their cornfields. They killed between 65 and 75, and captured one of Wowinchopunk's wives and her children. Returning downstream, the colonists threw the children overboard and shot out "their Braynes in the water". The queen was executed in Jamestown. The Paspahegh never recovered from this attack and abandoned their town.

A party of colonists was ambushed at Appomattoc in the fall of 1610, and West managed to establish a company of men at the falls of the James, who stayed there all winter. In February 1611, Wowinchopunk was killed in a skirmish near Jamestown, which his followers avenged a few days later by enticing some colonists out of the fort and killing them. In May 1611, Governor Thomas Dale arrived and began looking for places to establish new settlements; he was repulsed by the Nansemonds, but successfully took an island in the James from the Arrohattocs, which became the palisaded fort of Henricus.

Around the time of Christmas 1611, Dale and his men seized the Appomattoc town at the mouth of their river and palisaded off the neck of land, renaming it New Bermudas. The aged chief Powhatan made no major response to this colonial expansion, and he seems to have been losing effective control to his younger brother Opechancanough during this time, while the colonists strengthened their positions. In December 1612, Argall concluded peace with the Patawomeck, and he captured Powhatan's daughter Pocahontas. This caused an immediate ceasefire from the Powhatan raids on the colonists, as they held her ransom for peace. In the meantime, settlers had begun to expand south of the rivers, building houses at City Point in Hopewell, Virginia.

In early 1609, Jamestown Island had been the only territory under colonial control. By the end of this period, the Powhatans had lost much of their riverfront property along the James; the Kicoughtan and Paspehegh sub-tribes had been effectively destroyed, and the settlers had made major inroads among the lands of the Weyanoke, Appomattoc, Arrohattoc, and Powhatan. The Arrohattoc and Quiockohannock tribes disappear from the historical records after this, possibly indicating that they had been dispersed or merged with other tribes.[6]

Peace negotiations stalled over the return of captured hostages and arms for nearly a year; Dale went with Pocahontas and a large force to find Powhatan in March 1614. They were showered with arrows at West Point, so they went ashore and sacked the town. They finally found Powhatan at his new capital in Matchcot, and they concluded a peace that was sealed by the marriage of Pocahontas to colonist John Rolfe. This was the first known inter-racial union in Virginia and helped to bring a brief period of better relations between the Indians and the colonists. A separate peace was concluded the same year with the Chickahominy tribe which made them honorary "Englishmen" and thus subjects of King James I.[7] This period of peace has been called the peace of Pocahontas.[8][9]

Opechancanough maintained a friendly face to the colony, and even met with a Christian minister to give the appearance of his imminent conversion to Christianity. Then his warriors struck without warning from where they had been planted among the settlements on Friday, March 22, 1622 in the Indian Massacre of 1622.[10] A third of the colony were wiped out that day, and a higher toll would have been taken were it not for last minute warnings by Christian Indians.[11]

Powhatan war practice was to wait and see what would happen after inflicting such a blow, in hopes that the settlement would simply abandon their homeland and move on elsewhere. However, English military doctrine called for a strong response, and the colonial militia marched out nearly every summer for the next 10 years and made assaults on Powhatan settlements. The Accomac and Patawomeck allied with the colony, providing them corn while the colonists went to plunder villages and cornfields of the Chickahominy, Nansemond, Warraskoyack, Weyanoke, and Pamunkey in 1622. Opechancanough sued for peace in 1623. The colonists arranged to meet the Indians for a peace agreement, but poisoned their wine, then fell upon them shooting them and killing many in revenge for the massacre. They then attacked the Chickahominy, the Powhatans, the Appomattocs, Nansemond, and Weyanokes.

In 1624, both sides were ready for a major battle; the Powhatans assembled 800 bowmen with Opitchapam leading their force, arrayed against only 60 colonists. The colonists, however, destroyed the Powhatans' cornfields, and the bowmen gave up the fight and retreated.

A shortage of gunpowder in the colony delayed the colonists from going on marches in 1625 and 1626. The Indians seem not to have been aware of this shortage, and were themselves desperately trying to regroup. However, summer 1627 brought renewed assaults against the Chickahominy, Appamattoc, Powhatan proper, Warraskoyak, Weyanoke and Nansemond. A peace was declared in 1628, but it was more like a temporary ceasefire; hostilities resumed in March 1629 and continued until a final peace was made on September 30, 1632.[citation needed] The colonists began to expand their settlements on the Eastern Shore and both sides of the James, as well as on the south of the York, and they palisaded off the peninsula between the York and James at about Williamsburg in 1633. By 1640, they began claiming land north of the York, as well, and Opechancanough leased some land on the Piankatank to settlers in 1642 for the price of 50 bushels of corn a year.[citation needed]

By 1634, a palisade (stockade) was completed across the Virginia Peninsula, which was about 6 miles (9.7 km) wide at that point. It provided some security from attacks by the Virginia Indians for colonists farming and fishing. It is partially described in a letter written by Captain Thomas Yonge in 1634 from Jamestown:

a strong palisade… upon a straight between both rivers and… a sufficient force of men to defence of the same, whereby all the lower part of Virginia have a range for their cattle, near forty miles in length and in most places twelve miles (19 km) broad. The pallisades is very near six miles (9.7 km) long, bounded in by two large Creeks. …in this manner to take also in all the ground between those two Rivers, and so utterly excluded the Indians from thence; which work is conceived to be of extraordinary benefit to the country.

Twelve years of peace followed the Indian Wars of 1622-1632 before another Anglo–Powhatan War began on April 18, 1644,[12] as the remnants of the Powhatan Confederacy under Opechancanough tried once again to drive out the settlers from the Virginia Colony.[10] Around 400 colonists were killed.[13] 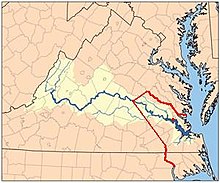 Red line shows boundary between the Virginia Colony and Tributary Indian tribes, as established by the Treaty of 1646; red dot shows Jamestown, capital of Virginia Colony

In the peace treaty of October 1646, the tribes formerly in the Confederacy became tributaries to the King of England. At the same time, a racial frontier was delineated between Indian and colonial settlements, with members of each group forbidden to cross to the other side except by a special pass obtained at one of the border forts. The extent of the Virginia Colony open to patent was defined as the land between the Blackwater and York rivers, and up to the navigable point of each of the major rivers. The treaty also permitted settlements on the peninsula north of the York and below the Poropotank, as they had already been there since 1640.

The war was followed by 30 years of relative peace between the colonists and the Powhatans, shattered only by the attacks of Bacon's Rebellion in 1676. This resulted in the Treaty of Middle Plantation signed by Cockacoeske, Powhatan's successor. The treaty set up reservations for each tribe, and allowed them hunting rights outside their reservations. It established that all the Indian rulers were equal, with the provision that the "Queen of Pomunky" was now owed the subjection of several scattered groups of Indians.[15]